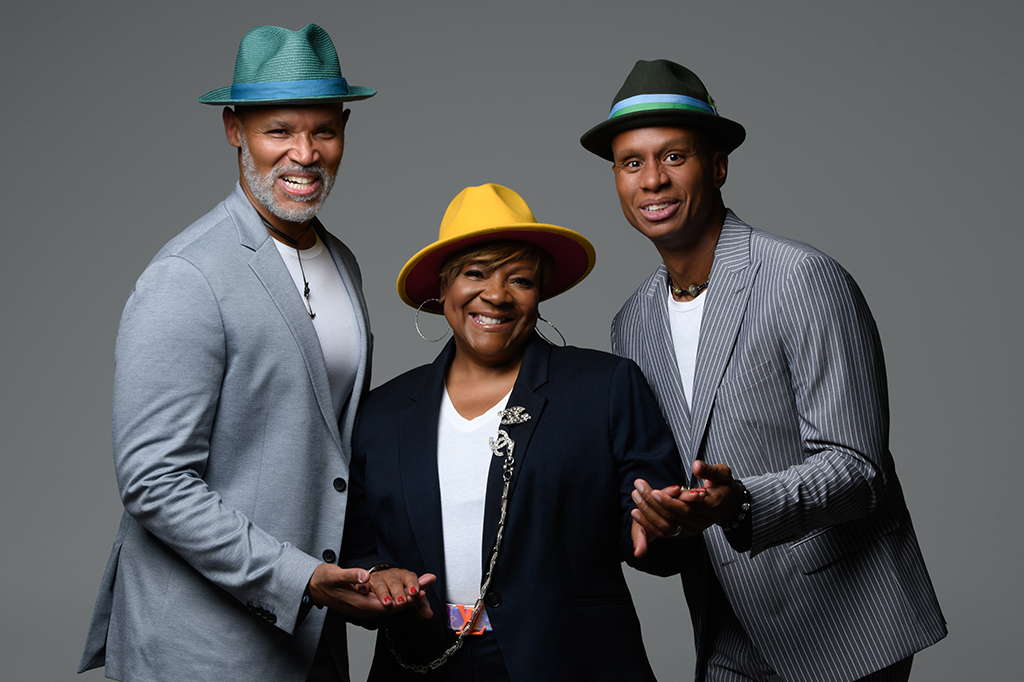 The music of Mark Brown crosses all musical genres — his impressive vocal range and extraordinary counter tenor voice continues to cross boundaries and reach new heights. He is an extension of a musical legacy left by his father, Charles Brown, well known on the New Orleans R&B music scene as part of “Sultans of Soul” vocal duo, which gained much popularity in the 1950s. A native of New Orleans, Mark has done background vocals for such notables as Bebe Winans, Patti LaBelle, Carlos Santana, Wyclef Jean, and Oleta Adams.

Vocalist, keyboardist, songwriter, producer, Patrick Sturgis was just eight years old when he was featured on the front page of a newspaper holding the caption “8-Year-Old Soloist Sparkles Among Stars.” Now, over 40 years later, he breaks new ground by satisfying his latent affinity for jazz, particularly American jazz standards reminiscent of the legendary Nat Cole and Ella Fitzgerald. His love affair with music has spanned over four decades and continues to evolve through new collaborations and mediums.

Nona Brown is a vocalist, musician, composer, and producer all in one! Nona’s musical journey spans over 30 years working with The Fray, Lenny Williams, Pattie LaBelle, Stephan Jenkins, and Mickey Thomas. Nona’s gospel music roots led to many wonderful opportunities such as working with Josh Groban as choir coordinator and guest vocalist for his tour, and, until his passing, as a group member of gospel music legend Edwin Hawkins and the New Edwin Hawkins Singers. Nona released her second solo project “Songs From My Journal Vol. 1,” which charted at #14 on the Billboard charts in its first week of release in 2019. She is currently working on Vol. 2!

Grammy Award-winning pianist, composer, arranger, lecturer, and musical director Tammy L. Hall began playing the piano at age four and is still devoted to that instrument, music, and its calling. After attending Mills College in Oakland, California, Hall’s career now spans more than four decades, with no end in sight.

Just recently, Tammy recorded with members of the San Francisco Symphony Orchestra, whose new conductor, the very much celebrated Esa-Pekka Salonen, begins his highly awaited tenure as one of the most adventurous and progressive music directors/conductors in that milieu. The project, Currents: Bay Area Blue Notes, a new series is curated by the late Maestro Michael Morgan, conductor of the Oakland Symphony and guest conductor of the San Francisco Symphony. Shelter-in-place restrictions have made us all dive deeply into our creative pools and some great ideas/concepts certainly have emerged — Currents being one of them. Currents seeks to celebrate the unifying force of music through its many and varied genres by illuminating the commonalities shared in all genres. Tammy was personally chosen by Morgan to play on the jazz segment of the series, which aired in August 2020. In 2021, Marcus Shelby, Artistic Director of the Healdsburg Jazz Festival, conferred upon Tammy the honor of inaugural Artist-in-Residence for the 2021-22 season. She premiered her ﬁrst written (theatrical) work in progress: Convergence, a story of an imagined meeting between Mary Lou Williams, Dorothy Donegan, Nina Simone and Hazel Scott, in March 2021.

Valerie Joi Fiddmont is a brilliant composer, pianist and singer, a phenomenal choir director and music producer, and an exceptional teacher, scholar, and writer. And above all else, Valerie Joi believes in the healing power of music for spiritual and social transformation.

Valerie Joi’s music emanates a joy rooted in freedom and authenticity. Dedicated to the power of collective song, she invites listeners to join her with their most authentic selves. Through her music, Valerie Joi conveys a powerful message of social justice, challenging people to go deeper, to heal and to forgive. She asks us to remember the planet, our ancestors and elders, and the children. And she reminds us to trust ourselves and each other, knowing that just like the choirs she directs, we are much more powerful when we join our voices together as one.

Valerie Joi grew up in a family of ministers, teachers and musicians and has been around music all her life. She studied classical piano and jazz voice, and has sung in and directed numerous choirs. A gifted and multifaceted musician, Valerie Joi has worked with many recording artists as a pianist, vocalist, composer, vocal coach, arranger and producer. She was featured as one of the director’s Top Ten Picks at the 47th Annual Monterey Jazz Festival and her original music can be heard in the films Jumpin’ the Broom and God and Gays: Bridging the Gap. A featured artist and guest soloist, Valerie Joi also leads musical ensembles, including her current band VJQ (the Valerie Joi Quartet). She was recently blessed with one of the most inspirational moments of her musical career, singing background vocals for Quincy Jones at the 59th Annual Monterey Jazz Festival in 2016.

Reflecting her passion for education, Valerie Joi developed a nine-week workshop entitled “The Singing Circle Music Ministry Experience” which teaches ministry through music. She applied these principles as the Director of the UC Santa Cruz Gospel Choir, where she directed from 2004-2016, and is a Porter College Faculty Fellow. Valerie Joi is also currently a PhD student in Transformative Studies at the California Institute of Integral Studies, where she is focusing on the interconnection between music, spirituality, and social activism.

As the founding Music Director for Inner Light Ministries in Santa Cruz, Calif., and the former director of the Inner Light Choir, Valerie Joi established a musical ministry renowned for its excellence, vision and creativity. During her 16-year tenure, she featured, accompanied and sang alongside artists such as Rickie Byars-Beckwith, Jacqueline Hairston, Linda Tillery, Broadway performer Charles Holt, and many more. This commitment to excellence resulted in an invitation for the Inner Light Choir to perform on the stage of Carnegie Hall in February 2012, “a clear reflection of their exceptional director, Valerie Joi Fiddmont” (Dennis Loy, Conductor-in-Residence). Valerie Joi received the further honor of singing the solo on one of her compositions “Living Grace” at the Carnegie Hall performance.

With an MBA in Finance and Entrepreneurship from Rice University, Valerie Joi combines her passion for music and education with expertise in business management. To this end, she provides project management services for the Institute for Women’s Leadership and the Institute for Gender Partnership to promote gender partnership and encourage diversity and inclusion in the workplace.

First and foremost, Valerie Joi teaches music as ministry and connection. Her CD of original compositions, Singing the Sacred Yes, is an invitation to deepen our relationship with the Divine. Her release with the incomparable pianist Tammy Hall, Remembering to Remember: Hymns for the Soul, pays beautiful tribute to the spiritual heritage of our country. And her upcoming recording, The SHINE! Project, reflects her life journey of learning the importance of forgiveness and authenticity, and recognizing the relationship between love and justice.

When Valerie Joi plays, sings, or conducts music, she becomes the music. It is visible, visceral and inspirational. She is committed to sharing her ministry of love and music with students from all walks of life, as she invites them to bless and be blessed through song. A consummate expression of music and Spirit, Valerie Joi uplifts her audiences and inspires them to experience their own sense of Divine Connection.

Leberta Lorál possesses a clarion voice that has been described as both Mezzo and Soprano (Swishenfach), as well as artistry that are both technically impressive and emotionally intense. The 2020-2021 season included and still includes a lot of therapeutic Covid-coping activities like baking, enjoyed by many friends and neighbors. In early 2021 Leberta was honored to sing in the Presidential Inauguration post-celebration, with pop great Demi Lovato, on Zoom. She also traveled to Los Angeles where she performed compositions by Duke Ellington in a celebration of Black History Month at Forest Lawn. The offering of songs composed by Florence Price HT Burleigh, Jeremiah Evans and Antonin Dvorak in Musical Soulmates, produced by pianist Kate Alm, closed the first quarter of 2021.

Spring of 2021 to the present blossoms with new collaborations with pianist/accompanist/composer Tammy L. Hall, including performances for the Ross McKee Foundation, Hall’s production A Time For Love at the Cinnabar Theater in Petaluma and To Nina Simone, With Love, in the Flower Piano series at Golden Gate Park in September.

In 2019, Leberta won KDFC’s Star Spangled Sing-Off, where she lit up San Francisco’s Oracle Arena, singing the National Anthem live from the pitcher’s mound for Opera at the Ballpark — San Francisco’s free simulcast of Gounod’s Romeo and Juliet. Further highlights included collaborations with Douglas Ovens, performing his composition Three Love Songs, for soprano and vibraphone, based on the poems of Alice Fulton. She also collaborated with pianist/accompanist Pauline Troia in her first independent project: Sustenance Through Song, based upon the ancient Greek concept of eight types of love — at least. Performances with the Camerata Singers of Monterey County, featuring Ralph Vaughan Williams’ Dona Nobis Pacem and teaching Vocal Master Classes at California State University-Monterey Bay, also made for a great year of forward motion and musical discovery.

2018 had its stellar moments too! In March of that year, Leberta was the featured soloist in Henry Mollicone’s Beatitude Mass, with the Camerata Singers and she again performed with them May in a benefit for two homeless women’s shelters. This collaboration led to an introduction to the composer Rick Yramategui. She sang his Look at the Birds of the Air, during the Monterey County Composers Forum in Carmel Valley in August of that year.

The recording of Richard Thompson’s original opera, Mask in the Mirror, based upon the life of American poet Paul Laurence Dunbar, is beautiful evidence of a wonderful collaboration between Ms. Loral and Mr. Thompson. They met in 2017 at the 20th Annual Conference of the African American Art Song, where Leberta performed the works of Mr. Thompson and composer Undine Smith Moore. During that conference, Mr. Thompson asked Ms. Loral to record the roles of Victoria and The Woman in the Bar for the Parma Records/Naxos label, which released the recording of Mask in the Mirror on February 8, 2019.

"The Mask in the Mirror, a chamber opera by Richard Thompson, chronicles Dunbar's (Paul Laurence Dunbar) rocky relationship with writer Alice Ruth Moore. Occasionally, we get a dose of something jazzier...in which the charming Joplinesque rag turns into a very catchy trio number for Humes, Leberta Lorál and Roland Mills, who sound terrific together.” —Joshua Rosenblaum, Opera News, Critics Choice, July 2019

An invitation from Mr. George Shirley brought Ms. Lorál to Michigan twice — once in December 2014 and again in 2016, to sing in his annual Heritage Holiday Concert in Ann Arbor. In August of 2012, Leberta sang in concert with Maestro Frederick Bayani Mabalot at the Herbert Zipper Concert Hall in Los Angeles, Calif. She was the soloist in Mahler’s Rückert-Lieder with the Symphonisches Orchester Münchens Andechs (SOMA), conducted by Maestro Andreas Pascal Heinzann, in February 2011. Additional engagements include performing the works of Maestro Mabalot at the Sydney Opera House and the Sydney Conservatorium of Music, sold out concerts with Metropolitan Opera Mezzo, Susanne Mentzer at the Monterey Museum of Art and the Santa Lucia Preserve in Carmel, Calif.

A regional winner of the Metropolitan Opera National Council Auditions, while living in Los Angeles, Leberta’s made numerous appearances as the featured soloist with the Los Angeles Philharmonic in their series at the Hollywood Bowl, the Southeast Symphony and the Los Angeles Master Chorale. She has performed a broad spectrum of concert works ranging from Baroque to Contemporary, garnering critical acclaim. Her core repertoire: Johann Sebastian Bach’s Magnificat and Mass in B Minor, Handel’s Messiah, Mozart’s Requiem, Rossini’s Stabat Mater, Mendelssohn’s Elijah, Saint-Saëns’ Christmas Oratorio and Faure’s Requiem; twentieth century compositions such as Vaughan Williams’ The First Novel, Mabalot’s Songs of Rumi and Thompson’s Songs of Passion. Her operatic repertoire includes the roles of Serena in Gershwin’s Porgy and Bess, the Mother in Humperdinck’s Hansel and Gretel, and of Ariadne (Strauss) and Venus (Tannhauser) - in preparation. Additional repertoire in preparation/progress: Strauss’ Vier Letzte Lieder and Mahler’s Das Lied von der Erde.