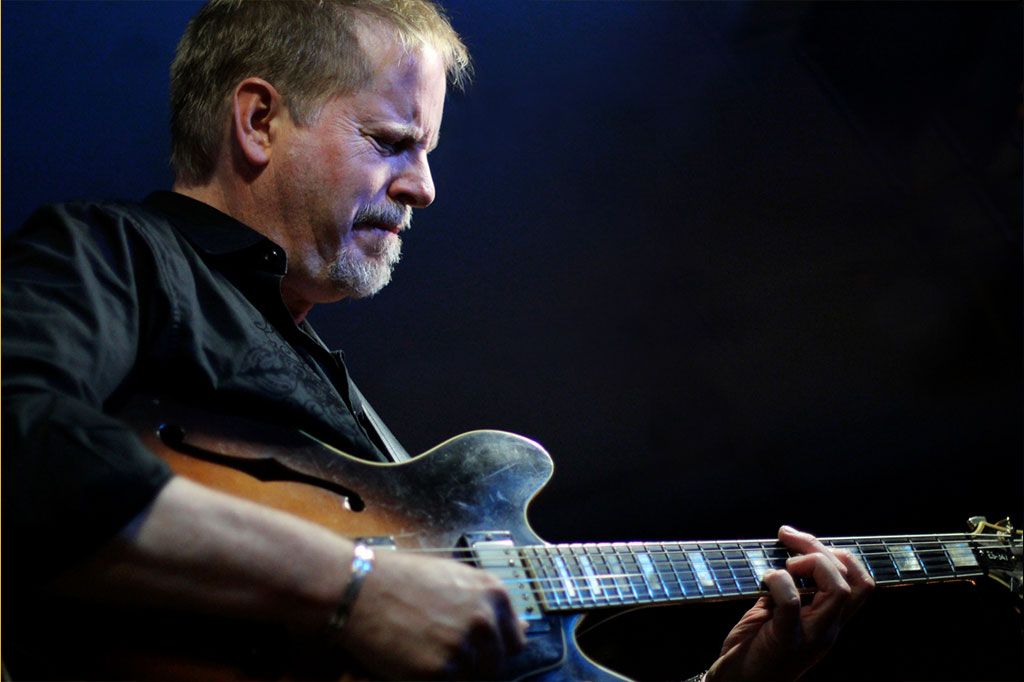 Whether you’ve heard guitarist Dave Stryker leading his own group (with 30 CDs as a leader to date), or as a featured sideman with Stanley Turrentine, Jack McDuff, and many others, you know why the Village Voice calls him “one of the most distinctive guitarists to come along in recent years.”

Hot House magazine awarded him Best Guitarist Fans Decision for 2017.  He was recently voted once again as one of the top Jazz Guitarists in the 2019 DownBeat Critics and Readers Polls for the 10th time.

Dave’s CD Eight Track III stayed at #1 on JazzWeek Radio chart for six straight weeks. Strykin’ Ahead featured the same lineup as Eight Track II — Steve Nelson, Jared Gold and McClenty Hunter, and received great reviews. Messin’ with Mister T, is a celebration of the man he worked with for over a decade — Stanley Turrentine, “Mister T” — with ten of the greatest tenor sax players on the scene today. It went to #1 on JazzWeek Radio and stayed in the Top 50 for 20 weeks and has received great reviews including 4 1/2 stars in DownBeat magazine. Dave’s last CD Eight Track was #9 for 2014 on the Jazz Week Radio Charts where it stayed for 20 weeks topping off at #3 for 3 weeks. DownBeat magazine picked it as one of the Top CDs of 2014 and ran a feature article in the June 2014 issue on Dave.

“I have followed Dave Stryker’s playing since his early days in Omaha through his long stay with Stanley Turrentine and his longstanding relationship with the great alto player Steve Slagle (another undersung heavy out there) and he just gets better and better with one of the most joyous feels around.” –Pat Metheny

Dave Stryker grew up in Omaha, Nebraska and moved to New York City in 1980. After establishing himself in the local music scene, he joined organist Jack McDuff’s group for two years in 1984-85. When McDuff wasn’t on the road (literally traveling by van all over the country) they worked a steady four-night a week gig at Dude’s Lounge in Harlem. His first break, this turned out to be an invaluable experience, paying his dues night after night with the soulful jazz organist. It was at Dude’s Lounge that Stryker met tenor saxophonist Stanley Turrentine, who would occasionally sit in. After leaving McDuff, Turrentine asked Stryker to join his quintet. From 1986-1995 he played with the legendary saxophonist at all the major festivals, concert halls, and clubs throughout the world. He is featured on two Turrentine CDs (Stanley recorded Stryker’s tune “Sidesteppin”). With Turrentine, Stryker was able to play with such jazz greats as Dizzy Gillespie and Freddie Hubbard. The 10 years playing alongside the tenor legend helped Stryker realize the importance of having his own sound. Dave continued to work with Stanley and was with him during his final week at the Blue Note in New York City, when he passed in Sept. 2000.

Early on Stryker realized that as much as he loved playing standards and the jazz repertoire, he had to have something of his own to give to the music. He feels that his writing combined with his playing is what shapes his musical expression. He has recorded and published over 150 of his own compositions and has released The Dave Stryker Songbook with most of his original music. Also 18 of the compositions (from the first five SteepleChase CDs) are compiled in the book The Music of Dave Stryker (SteepleChase Music).

Some of the other artists who have recorded Dave’s music are Stanley Turrentine, Kevin Mahogany, Victor Lewis, and Steve Slagle. Dave continues to perform with the Dave Stryker Organ Trio, his Blue to the Bone Band, and the Stryker/Slagle Band. Recent gigs for the Stryker/Slagle Band have included a recent week at Dizzy’s Club Coca-Cola at Jazz at Lincoln Center, the Monterey Jazz Festival, the Blue Note in Las Vegas, the Jazz Bakery in LA, and a 2003 tour of Japan.

Sideman work has included vocalist Kevin Mahogany’s group, with Dave writing and arranging music for Kevin’s Telarc release Pride and Joy and Another Time, Another Place on Warner Bros. and tours of Europe, Japan, Brazil, Poland, and Carnegie Hall. He also has worked with Blue Note saxophonist Javon Jackson and pianist Eliane Elias. He has appeared on over 50 CDs as a sideman. As a producer, Stryker compiled the CD The Guitar Artistry of Billy Rogers which is the only existing record of the brilliant jazz playing of the late underground legend who was his friend, former teacher, and member of the Crusaders. He has also produced A Tribute to Grant Green on Evidence Music.

Dave is the Adjunct Professor of Jazz guitar at Jacobs School of Music at Indiana University, and at the John J. Cali School of Music at Montclair State University. He is passing along his experience by teaching privately and at the Aebersold Summer Jazz Workshop, and the Litchfield Jazz Camp. His book Dave Stryker’s Jazz Guitar Improvisation Method Vol. III is available on his website.