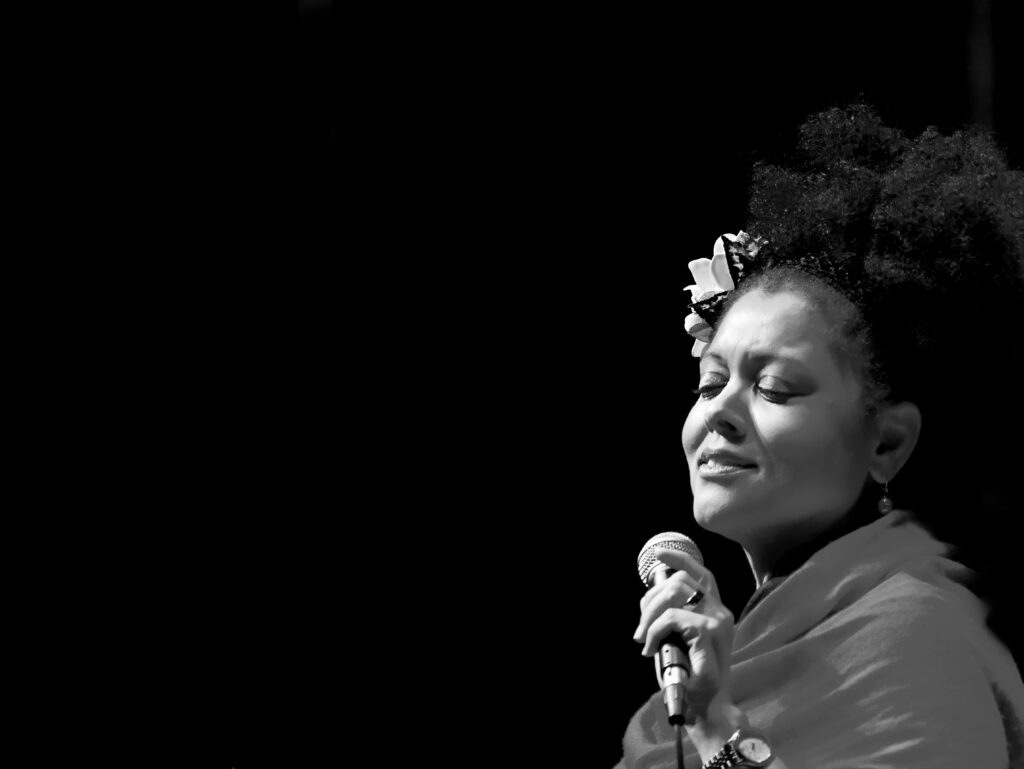 Awarded "Most Influential African American in the Bay Area" in 2005 and "Best Jazz Group" in 2013, vocalist Dr. Kim Nalley is already being called "legendary" and "a San Francisco institution."  Nalley was discovered by Michael Tilson Thomas singing to packed audiences live with no amplification. MTT recorded her singing live with no amplification and invited her to sing with the San Francisco Symphony. Subsequently she became a Rounder Records recording artist and went on a worldwide tour gracing concert halls from Moscow to Lincoln Center and festivals from Umbria Jazz to Monterey Jazz garnering effusive international press, awards and ranking high on the jazz charts and Gavin Report for her many albums.

Nalley had a solid background in classical music before switching to jazz for the freedom it provided.  A true renaissance woman, Kim Nalley has been a featured writer for JazzWest and SF Chronicle's City Brights, shortlisted for a Grammy nomination, a produced playwright, an avid Lindy Hop & blues dancer, and is the former jazz club owner of Jazz at Pearl’s. She earned her Ph.D. in history at UC Berkeley and is a published scholar.  She was shortlisted by DownBeat Critics Poll in 2017 as a "Rising Star Deserving Wider Recognition". Nalley's many philanthropic endeavors include founding the Kim Nalley Black Youth Jazz Scholarship, fundraising for Richmond-Ermet Aids Foundation, BLM, Next Village, SF-Marin Food Bank, and Department of Economic and Covid relief sponsored in part by Community Development/Connecticut Office of the Arts as part of their 2020 Artists Respond grant program.

In looks, Kim Nalley exudes the aura of a diva from a bygone era. Vocally, she has pipes to burn packing a 3 1/2 octave range that can go from operatic to gritty blues on a dime, projection that can whisper a ballad yet is capable of filling a room with no microphone, and the ability to scat blistering solos without ever losing the crowd's interest or the intense swing. She has been compared to all the greats, but in the end, it's Kim Nalley and no one else — an unforced instrument with clarity and jazzy musicality, effortlessly delivered, and a sense of humor to boot.

A born singer from a family that boasts several generations of jazz musicians, Nalley was taught piano by her great-grandmother and studied classical music and theatre in high school before relocating to San Francisco in the footsteps of the Grateful Dead. Working her way through college by singing in small dives and jam sessions, Nalley learned all of the intricacies of jazz the old fashioned way. Music critic Phil Elwood and San Francisco Symphony conductor Michael Tilson Thomas quickly discovered Kim Nalley and brought her to national attention after they noticed her singing nightly at the Alta Plaza to packed audiences — without amplification. Tilson Thomas hired Kim Nalley to sing a program of Gershwin with the San Francisco Symphony and recorded her farewell concert at the Alta Plaza.

Since then, Dr. Kim Nalley has performed globally, including major jazz festivals such as Monterey, Umbria Jazz and Lincoln Center and lived in Europe for several years before returning to San Francisco to re-open the jazz club Jazz at Pearl's. During her tenure from 2003 to 2008, Nalley raised the club to iconic international acclaim as the owner and artistic director.

She has collaborated with artists such as Rhoda Scott, David "Fathead" Newman, Houston Person, James Williams, Michael Tilson Thomas, and the San Francisco Symphony. She has recorded several on both major and indie labels, including She Put A Spell On Me, which was short-listed for a 2006 Grammy Award, and Million Dollar Secret, which charted in the Jazz Top 40.

Nalley often combines music and history to create historiographical concerts, including her award-winning Ladies Sing the Blues, She Put a Spell on Me: Tribute to Nina Simone for Jazz at Lincoln Center, Freedom's Song: Music of the Civil Rights Movement, musical director and curator for the Martin Luther King Institute's Commemoration of the 50th anniversary of the March on Washington and The Heart of Lady Day, a Billie Holiday biopic. She has performed with Angela Davis recreating her seminal book Blues Legacies and Black Feminism for SFJAZZ. As a playwright she has written Ella: the American Dream, a bio-musical about Ella Fitzgerald which premiered in 2008. As an actress, she portrayed Billie Holiday in the dramatic play "Lady Day in Love," Blues Speak woman in Zora Neale Hurston's "Spunk" and has starred in Teatro Zinzanni as Madame Zinzanni, a role subsequently filled by Joan Baez and Sandra Reeves-Phillips.

Dr. Kim Nalley's dissertation GI JAZZ: African Americans as Artists and Occupiers in post-WWII Germany details the German chittlin' circuit that popped up on and around military bases, how some jazz musicians chose to stay in Europe to become expats, interracial relationships, and tells the story of the 7th Army Band which boasted the titans of jazz, including Cedar Walton, Eddie Harris, Leo Wright, Lex Humphries, Lanny Morgan, Don Menza, Don Ellis, Sam Fletcher, and Billy Paul.  Other scholarly papers by Dr. Nalley include Two Gardenias for Civil Rights: Robin Carson’s photo of Billie Holiday and This Bitter Earth: Infertility for Billie, Ella and Sarah. She is also featured on Google Talk for her presentation Rethinking Billie Holiday on her Centennial.