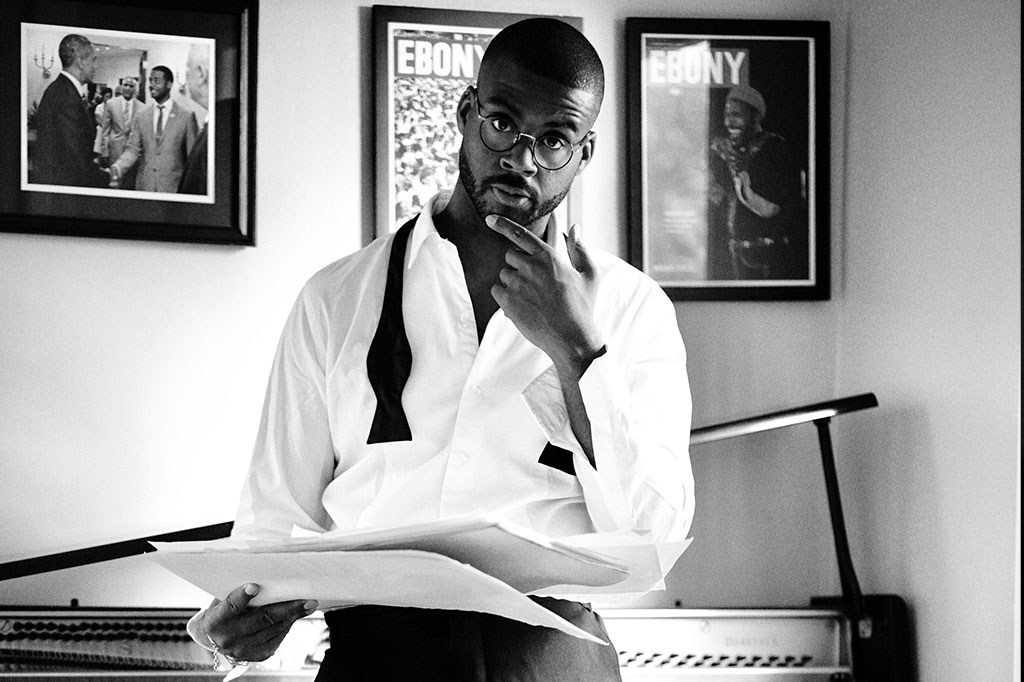 Emmy Award-winning composer and pianist, Kris Bowers, creates genre-defying music that pays homage to his jazz roots with inflections of alternative and R&B influences. The result is a sound rife with contradictions, a work of nuanced alchemy situated at the summit of his influences. A confluence of jazz greats, classical standards, and the alternative and experimental music of his youth, along with the cinematic storytelling of his most studied film scores. Bowers’ earliest musical inspirations were varied, transcending generation and genre to include work by artists such as Steve Reich, Radiohead, Stevie Wonder, Brian Eno, Herbie Hancock, and Jimi Hendrix. As a young musician, Bowers brought the language of jazz to his covers of artists like Death Cab For Cutie, Tune-Yards, Radiohead, and Kendrick Lamar.

Since 2013, the Juilliard-educated pianist has established himself at the forefront of Hollywood’s emerging generation of genre-defying composers. What sets Bowers apart is his unique ability to compose music that resonates across such a diverse continuum of artists, storytellers, and audiences. From scoring documentaries like Kobe Bryant’s Muse (SHOWTIME, 2015) and Norman Lear: Just Another Version of You (2016), to scripted series including Shonda Rhimes and Paul William Davies’ For The People (ABC), Netflix’s Dear White People, and SHOWTIME’S Black Monday (Exec. Produced by Seth Rogen & Evan Golberg), Bowers’ work as a film and television composer is a testament to his versatility as an artist.

Bowers first made a name for himself in 2011, when he won the prestigious Thelonious Monk International Jazz Piano Competition at the Kennedy Center in Washington, D.C., where Aretha Franklin chose him as a favorite to win during the semi-finals concert. The win earned him a record deal with Concord Jazz, who later released his debut album, Heroes+Misfits, which opened at number one on the iTunes jazz chart in 2014.

Throughout his career, Bowers has consistently championed an art practice guided by multi-disciplinary collaboration. In so doing, Bowers marked the release of his album, Heroes+Misfits, with an immersive, multi-sensory listening party and art event in which artists like Jeremyville, Sanford Biggers, and Janette Beckman, among others, contributed works that they felt mirrored the album. In 2015, Bowers partnered with choreographer and MacArthur Genius Grant winner Kyle Abraham on the performance piece Absent Matter. The following year the pair was commissioned by the Alvin Ailey Dance Company to create an original composition for its modern ballet, Untitled America. In 2016 Danish speaker brand Bang & Olufsen invited Bowers to compose original music for an exclusive dinner and experiential art event in Brooklyn, as part of their Future Series arts initiative with Aska’s Michelin-awarded chef, Fredrik Berselius. Bowers collaborated with Krug Champagne and Eleven Madison Park’s Chef Daniel Humm and Will Guidara on Krug Journey Southampton in 2017, for which he composed and performed an original piano composition reflective of the night’s menu.

In 2018, Bowers had the honor of collaborating with Emmy and Academy Award-winning director Peter Farrelly and Academy Award-winning actor Mahershala Ali on their critically acclaimed Green Book (Academy Award Winner, "Best Picture" and "Best Original Screenplay," 2019). In addition to scoring the film, Bowers served as Ali’s on-screen hand-double, providing the fingering for close up piano shots, as well as spending months working with Ali as his piano instructor — Ali Went won "Best Supporting Actor" for the role. Bowers’ work on Green Book landed him a nomination for "Best Score" at the 2019 Critic’s Choice Awards, at which he performed a live version of “Dear Dolores” from the Green Book soundtrack.

Bowers’ scoring work can be heard across a wide range of film and television from Amazon’s TV movie The Snowy Day (for which he won a Daytime Emmy) to Elaine Stritch: Shoot Me, Seeds of Time, Play it Forward, I Am Giant: Victor Cruz, and Little Boxes, which premiered at the 2017 Tribeca Film Festival and was acquired by Netflix. In early 2018, Bowers scored the critically acclaimed drama, Monsters, and Men, which premiered at the 2018 Sundance Film Festival. His work appeared in Ava DuVernay’s miniseries, When They See Us (Netflix) about the Central Park Five, for which he was nominated for an Emmy award. He later composed music for the television miniseries Mrs. America for which he was again received an Emmy nomination for Original Dramatic Score, and most recently received two Emmy nominations for his work on the Netflix drama series Bridgerton. Additionally, his original music and lyrics are featured as the main theme and end credits for Madden NFL 19: Longshot, as well as the forthcoming Madden 2020.

Bowers has recorded and performed with artists such as Q-Tip, Aretha Franklin, Ludacris, Christian Rich, Jay-Z, and Kanye West. He has contributed to albums by Marcus Miller, José James, Moses Sumney, and Murs.

Bowers is an official Steinway Artist, he was named one of 12 "Artists to Watch" by iTunes in 2014, and he was one of six composers invited to participate in the Sundance Film Composers Lab at Skywalker Sound in 2015. In 2016, he was selected as one of 40 artists to perform at the White House for International Jazz Day, an event hosted by President Barack and First Lady Michelle Obama. Bowers received the prestigious ‘ROBIE Pioneer Award’ from the Jackie Robinson Foundation in 2019.

Bowers currently lives in Los Angeles with his wife.