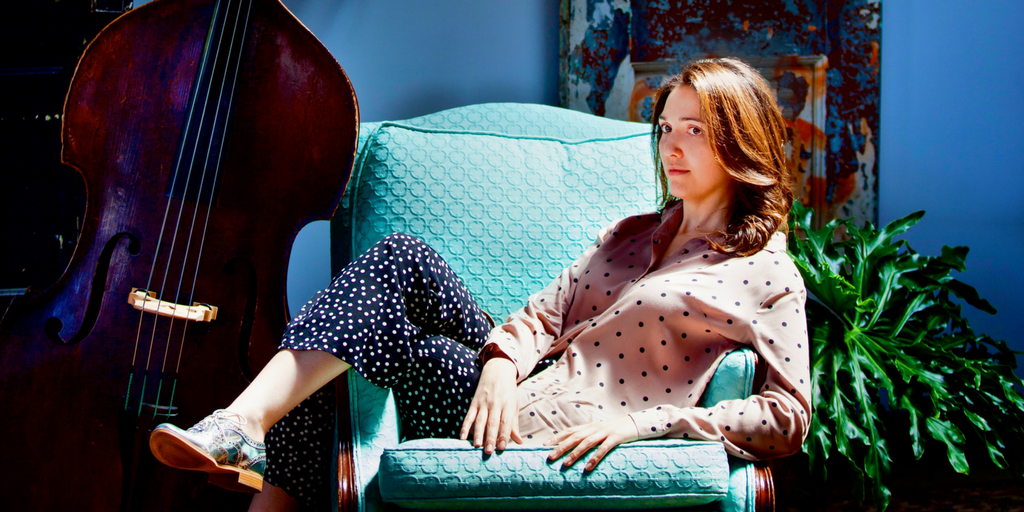 Rising star Katie Thiroux is a bassist, vocalist and composer. Coming from a musical family in Los Angeles, Katie began her career in music at age four on violin, and switched to bass at eight. By age 10, she was performing in principal vocal roles in the LA Opera and Opera Pacifica. She began studying privately with jazz vocalist Tierney Sutton at the age of 12, and in 2005, Thiroux began a mentorship with John Clayton. Among her many awards, she’s received the Shelly Manne New Talent from the Los Angeles Jazz Society, and in 2006, Katie was awarded the full-ride Phil Ramone Presidential Scholarship to Berklee College of Music. Thiroux was asked to teach abroad at the Berklee International School in Quito, Ecuador, and when she returned Los Angeles, she completed a masters of Jazz Bass from California State University of Long Beach on full scholarship in 2012. In 2015, Katie was a semi-finalist in the Thelonious Monk Competition.

Thiroux carries on the hard-swinging tradition of such bass masters as Ray Brown and John Clayton, while channeling the buoyant vocal finesse of iconic singers including Anita O’Day, Chet Baker and Ella Fitzgerald. She has performed at jazz festivals in the United States, Mexico, Germany, Finland, Serbia, Singapore and Switzerland as both a leader and a sideman. In addition, Thiroux often incorporates workshops for students and audiences.

Her debut record, Introducing Katie Thiroux was released in 2015, and received many awards including “Debut Record of the Year” from the Huffington Post, All About Jazz, the Jazz Journalists Association and “Top 5 Debut Records of the Year” from the NPR Jazz Critics Poll. Katie’s latest recording, Off Beat, features pianist Justin Kauflin and drummer Matt Witek, as well as saxophonist Roger Neumann and saxophonist and clarinetist Ken Peplowski. It has already been cited by DownBeat as one of the “Best Albums of 2017.”

This year, the Monterey Jazz Festival welcomed Katie as one of the Traveling Clinicians. Her Trio with Justin Kauflin and Matt Witek will appear at the Kuumbwa Jazz Center in Santa Cruz on Monday, January 29.

How did you come to be a Traveling Clinician for Monterey?

Well, like I’ve learned from my mentor John Clayton, always keep your door open! I had reconnected with Paul Contos when I played at the Monterey Jazz Festival in 2015 with Justin Kauflin’s trio. Paul got in touch this past summer about being a traveling clinician for MJF. Actually, his first email was something like, “I have an idea but I think you’re too busy.” Then he told me what was evolving with the program and it is right in line what I want I do. When I’m on tour I go to as many schools as I can to work with students. I was lucky to have musicians come into my schools and that impact has stuck with me of education and giving back what I got.

I always looked forward to the NGJF [2004-2006] when I was at Hamilton High School. It was great to be around other students who loved the music as much as I did. It was a treat coming back years later as a grad student and reconnecting with the vibe that the festival offers. I like that it promotes “community” over who wins first place.

I had a unique experience being in the NGJO. I never liked doing auditions and didn’t make the orchestra, but the great bassist Ray Drummond said I was the alternate. Lo and behold, the bassist who made it broke his collarbone and I was ready for the call! It was great—a real musical family vibe with like-minded musicians. Playing at the Monterey Jazz Festival in 2006 was a thrill!

BELOW: Katie with the 2006 Next Generation Jazz Orchestra at MJF49.

How have your educational experiences driven your want/need to bring your knowledge to the next generation of players?

I owe more than anything that money can buy to all of my teachers. Of course, I learned about music and technique from my teachers. But I also learned about discipline, business, personal relationships and other major life lessons. I like to tell students—if are serious about pursuing music as a career—that we are lucky to have found what makes us happy and in turn can make other people happy, and also make it our profession! If you first think about getting famous and becoming rich, there’s no point. Those can be a result but your intentions have to be set on something bigger and long-lasting. For students that like music but don’t want to study, I say that’s okay! The world needs sound and lighting engineers, artistic directors and most importantly, an audience! I tell them to support live music when they are older. Programs like the traveling clinicians help to instill seeing live music at a young age and there are many positive effects of live music.

Is there anything you think is important about jazz that connects people with their understanding of themselves and their culture?

Jazz is so wonderful because everyone as a completely different experience listening to it. I feel that people, not just younger people, have not had the opportunity to listen to any jazz in their lifetime because it’s simply not available to them. I have students attend a wide range of jazz concerts which include elements of straight-ahead, modern, blues and hip hop. I had students who have never listened to jazz be so moved by a ballad or stunned when someone would break out rapping during a groove. They went thinking that they wouldn’t like it or be able to relate to it. But every student said, wow, I can’t believe they are doing that in the moment. None of the artists we listen to can do that! Culturally, most people relate to repetition—like “Top 40” radio. When we give people the opportunity to listen and see jazz I feel that they can connect to the “in the moment” as aspect—because we are all living “in the moment!”

BELOW: Katie at the 2011 Next Generation Jazz Festival.

Katie Thiroux at the 2011 Next Generation Jazz Festival

How can younger people come to love jazz as listeners if they are not a player themselves? How can we do better outreach in expanding the music?

Listening to music is so important for young people and they can come to have a love for jazz music even if they don’t play an instrument. I have seen great results in classrooms when there has been 10 minutes a day devoted to listening to jazz music. It has scientifically proven to help improve memory retention, focus, language, mood and behavior, immunity and even repair cells. Why do most kids like pop music? Because they are heavily exposed to it. If students were able to listen to jazz in school on a regular basis they could get excited about it. The music would probably also take them in positive directions that may not have thought would be possible.

Tell us about the group that’s playing at Kuumbwa.

Justin Kauflin (piano) and Matt Witek (drums) will be joining me. We’ve been playing steadily as the Katie Thiroux Trio since 2016. I met Matt Witek in 2006 at the Berklee College of Music, and I met Justin at the Vail Jazz Party in 2014 when we were both a part of the Alumni group. We connected musically and I knew I wanted to make more opportunities to perform together. Matt and I have also been a part of Justin’s trio and we really have fun making music together and connecting with the audience.