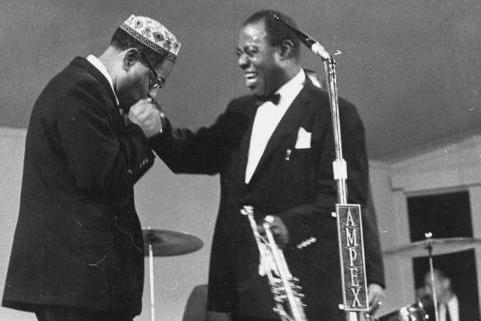 ABOVE: Dizzy Gillespie and Louis Armstrong at MJF1 in 1958.

From the first Monterey Jazz Festival in 1958 through its 34th year in 1991, Dizzy Gillespie was nearly synonymous with the festival. General Manager Jimmy Lyons had booked Diz at least 18 times officially (for at least 31 known performances). Some years, Dizzy would just show up. Lyons had been a supporter and fan of Diz’s since he was a WWII DJ with Armed Forces Radio, and had a picture of Diz inscribed To Jimmy: Just waitin’. Jazz critic and author Gene Lees once claimed that Dizzy was the “glue” that held the festival together in the early years. “When I first interviewed him, I was on a San Francisco radio station,” Lyons recalled to author Ira Kamin in 1978. “He would come by after his gig with a sandwich in a paper bag, and I’d ask him a question and all you’d hear would be Dizzy eating his sandwich.”

Gillespie, like Lyons, would have turned 100 in 2017. Gillespie’s mere presence at the festival from the very beginning would attract a caliber of talent and camaraderie that united the fans and the artists. Even though bebop was a more “serious” development of jazz and Dizzy was its main attraction, he never lost the human connection with his audiences and kept the entertainment value he had learned with his tenure with the big bands of Cab Calloway and Earl “Fatha” Hines in the 1930s and ’40s. He never forgot his audience and never turned his back on them—he engaged directly with the adoring crowds. It was no accident that Jimmy Lyons chose Dizzy to act as the emcee for the inaugural Monterey Jazz Festival in 1958, and when Gillespie introduced one of his trumpet idols and jazz forefather, Louis Armstrong, he kissed his hand.
Dizzy Gillespie and Jimmy Lyons at San Francisco’s KRON TV in 1963

ABOVE: Dizzy Gillespie and Jimmy Lyons at San Francisco’s KRON-TV in 1963.

The musical advances and innovations Diz made in the 1940s were apparent at Monterey throughout the ‘60s, as Diz appeared with both groups small and large, performing large works, bebop, afro-cuban, tributes, and more, with his signature cheeks through his iconic bent trumpet.

Diz was full of surprises throughout the years. He would announce he would play “a short number,” and then play one single note note. He blew the first music of the 1958 festival with “The Star Spangled Banner.” In 1963 and ’64, Diz ran for president based on an idea from Jean Gleason, the wife of critic (and MJF co-founder) Ralph Gleason. (Miles Davis was supposed to be the Director of the CIA). Although it was somewhat of a protest campaign, Dizzy was serious about civil rights, and donated the sales of campaign buttons and sweatshirts to the Congress for Racial Equality and the Southern Christian Leadership Conference. (In fact, Gillespie had represented the US State Department on international tours to promote democracy and cultural diplomacy as early as 1956.)

An album of Dizzy’s 1963 Monterey Jazz Festival’s performance featured “Vote Dizzy,” an adaptation of his classic bebop anthem “Salt Peanuts,” was posthumously released in 1997, and is typical of Gillespie’s humor.

By 1975, Dizzy Gillespie was on his 11th year of performances at the Monterey Jazz Festival. Diz was always open to something new, so there was a little era-specific disco influence, but he was never strayed far from the blues.

In 1967, he snuck up onstage during Carmen McRae’s performance and softly began playing in her ear. In 1979, a power outage in the Arena created a flashlight-lit performance by Diz and Stan Getz. Eleven years later in 1990, Diz angrily threw Getz’s cigarette pack off the Arena stage—Getz was now suffering from cancer, and would pass away nine months later.

Dizzy Gillespie and Carmen McRae at MJF10 in 1967.

ABOVE: Dizzy Gillespie and Carmen McRae at MJF10 in 1967. ©Monterey County Herald

In 1991, Dizzy’s last performance at Monterey was with Paquito D’Rivera and other members of Dizzy’s final big band project, the United Nation Orchestra. In 1992, he appeared as a guest on stage with the Festival’s California High School All-Stars, who clearly adored him even though he was too sick to play. Less than four months later, Dizzy passed away on January 6, 1993 at age 75. At the 36th Monterey Jazz Festival that September, there was a A Tribute to Dizzy Gillespie with Slide Hampton & the Jazzmasters with Jimmy Heath, Paquito D’Rivera, Dianne Reeves, Clark Terry, and George Mraz. At the opening of the somber 2001 Monterey Jazz Festival, taking place just 10 days after 9/11, the recording of Dizzy’s 1958 performance of “The Star Spangled Banner” was played to a silent and reverent audience. Other tributes and comission pieces would follow in later years, including Cubano Be! Cubano Bop! A Tribute to Chano Pozo & Dizzy Gillespie with Poncho Sanchez & his Latin Jazz Band featuring Terence Blanchard in 2011.

Even as he became a global ambassador for jazz, Dizzy was credited and seen as a symbol for the advanced language of bebop and the pioneering the afro-cuban jazz artform, all while creating a fun-loving persona that would attract new audiences. Monterey would see the man and his music, human, but already a legend, on stage many times. “He was such a friendly guy,” recalled Jimmy Lyons to writer Jeff Kaliss in a 1993 MJF program article about Dizzy’s passing. “Whatever I asked him to do, he did.”

In 1995, the Monterey Jazz Festival added a third stage on the Grounds right across from the Nightclub—and it was named “Dizzy’s Den” in the late trumpeter’s honor.

Dizzy, Duke, The Count and Me: The Story of the Monterey Jazz Festival
by Ira Kamin and Jimmy Lyons (1978, out of print)