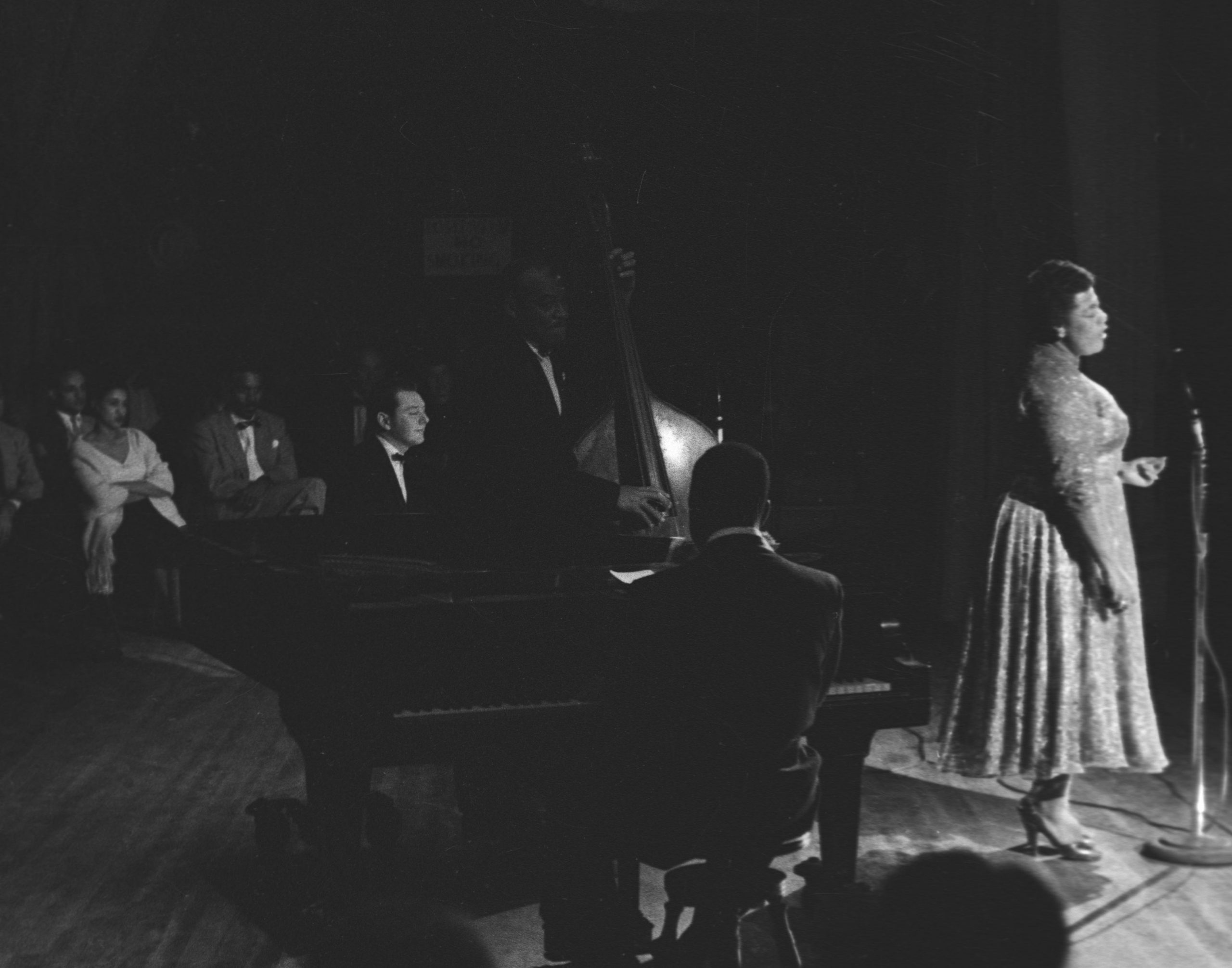 ABOVE: Jimmy Lyons and Ella Fitzgerald at Sunset School Auditorium in Carmel, January 9, 1956.

Ella Fitzgerald, the “First Lady of Song,” never played the Monterey Jazz Festival, but she did have a role in creating a roadmap and appetite for a jazz festival on the Monterey Peninsula. As a vocalist, there were very few who could compete with Ella’s unlimited “scat” vocabulary, which she had been pioneering and developing since the late-1930s into a high art, bridging the early jazz and swing eras to bebop. If Billie Holiday, another jazz icon, was the moon, Ella was the sun—and her vocal phrasing and style would become a template for many vocalists who followed her. At MJF60, Regina Carter will pay tribute to the iconic singer on Friday, September 15 in the Arena with Dear Ella.

By 1956, Fitzgerald was 35 years old and had been in the public eye for over two decades. At age 15, she had won an amateur night at the Apollo Theater in New York City, and her considerable vocal skills impressed not only the crowd, but also Benny Carter, who was in the band. In early 1935, Ella was hired by the influential drummer-bandleader, Chick Webb, who was the “King of Swing” of the Savoy Ballroom, for $12.50 a week. With the Webb band, Ella began to record for the Decca label, leading to a string of hits which included “(If You Can’t Sing It) You Have to Swing It” and her arrangement of 1938’s “A-Tisket, A-Tasket,” which stayed on the top of the pop charts for over four months and sold one million copies. These songwriting royalties would become important later.

After Chick Webb died in 1939, Ella became the group’s leader and continued to embrace the newly-emerging bebop style. But by 1942, times had changed both musically and economically, and she closed the big band to begin a solo career at age 25.

Since the technology of the era was limited by 78 rpm singles, Ella’s first proper LP album was not released until 1950. Decca mostly reissued the singles she had recorded in the past (as collections), and Ella felt she was not breaking any new ground and was yearning for a new direction. MJF Founder Jimmy Lyons had the chance to present her on Monday night, January 9, 1956 in nearby Carmel. Billed as Jimmy Lyons Presents Ella Fitzgerald in Jazz at the Sunset, tickets were $3.20 for the best seats, and the band featured Ella on vocals, Don Abney on piano, Vernon Alley on bass, and Jackie Mills on drums. Lyons mistakenly sold both stubs of the tickets, resulting in an overbooked room! She sang 12 songs during each of her two 40-45 minute sets.

Journalist Michael Katz, writing for the Monterey Jazz Festival’s 2015 program about the 60th anniversary of another Jazz at the Sunset show — Erroll Garner’s legendary 1955 Concert by the Sea — spoke with MJF Board member Jim Costello. At the time of the Garner and Fitzgerald visits to Monterey, Costello was 12, and he recalled:

The [Jimmy Lyons Presents concerts] were scheduled on Monday nights, because the musicians were usually en route from San Francisco to Los Angeles. Because it was a work night, the concerts were only one set.” The concerts were booked in late summer and early autumn, considered “shoulder season,” when not much else was going on around Monterey Bay. The concept of West Coast jazz hadn’t yet made the journey from the hip San Francisco scene. Lyons brought jazz greats such as Duke Ellington, Stan Kenton, Cal Tjader, Dave Brubeck, and Ella Fitzgerald to the Monterey Peninsula as he struggled to find backers in the community for his nascent festival. In one locally-famous incident, Lyons, never the greatest businessman, accidentally sold both sides of the double entry tickets for the Ella concert, perhaps inspiring the concept of over-booking. He had to hurriedly schedule an extra set to accommodate the overflow crowd.

ABOVE: Jimmy Lyons and Ella Fitzgerald at Sunset School Auditorium in Carmel, January 9, 1956. Extra seating had been placed on the stage to accommodate the SRO crowd. A recording of the show does exist, and the tapes reside at the Monterey Jazz Collection at the Stanford University Archive of Recorded Sound.

Ella’s career had been in a steady ascent through her association with Norman Granz, who had booked her on the famous Jazz at the Philharmonic tours of the 1940s and ’50s. When Ella first came to the Monterey Peninsula in January 1956, she was less than a month away from recording the seminal Ella Fitzgerald Sings the Cole Porter Song Book for Verve, the record label Granz had established to showcase Fitzgerald’s extraordinary talents. These groundbreaking albums (begun February 7–9, 1956) and the subsequent collections Ella and Louis; Ella Fitzgerald Sings the Rodgers & Hart Song Book; Ella Fitzgerald Sings the Duke Ellington Song Book, and others were recorded and released in quick succession which cemented her reputation as one of the iconic vocalists in the world. “I never knew how good our songs were until I heard Ella Fitzgerald sing them,” Ira Gershwin has been quoted as saying.

With the 1950s bringing new audiences to jazz through the long-playing record, Ella delivered masterly and definitive interpretations of classic American songbook material. In 1958, the first Grammy awards were held, and Ella won the first two of her 13 Grammys for Best Female Vocal Performance (The Irving Berlin Songbook) and Best Individual Jazz Performance (The Duke Ellington Songbook). But in 1956, Lyons had caught her on the cusp between transitioning from being a beloved but jazz-centric hero to an international star and icon, deserving of single-name status—Ella.

All the sales and royalties had made Ella Fitzgerald a rich woman, but by all accounts, she led a humble lifestyle and was very frugal with her money. After a lifetime of being in the public eye, Ella passed away in 1996 from complications due to diabetes. But in 1993, she had created and funded the Ella Fitzgerald Charitable Foundation “in order to fulfill her desires to use the fruits of her success to help people of all races, cultures and beliefs. and Ella hoped to make their lives more rewarding, and she wanted to foster a love of reading, as well as a love of music. In addition, she hoped to provide assistance to the at-risk and disadvantaged members of our communities—assistance that would enable them to achieve a better quality of life.”

Fitzgerald’s contributions to jazz are so numerous, they can’t be measured. But after her many awards, including the Kennedy Center Honors, the Presidential Medal of Freedom and the National Medal of the Arts, Ella’s power is still felt on vocalists worldwide, and through the Foundation that bears her name. Ella would have turned 100 in 2017, and we celebrate her spirit, voice, and her generosity.

BELOW: The tape box and reel from her 1956 show in Carmel, now stored at the Monterey Jazz Festival Collection at the Stanford University Archive of Recorded Sound in Palo Alto, Calif.