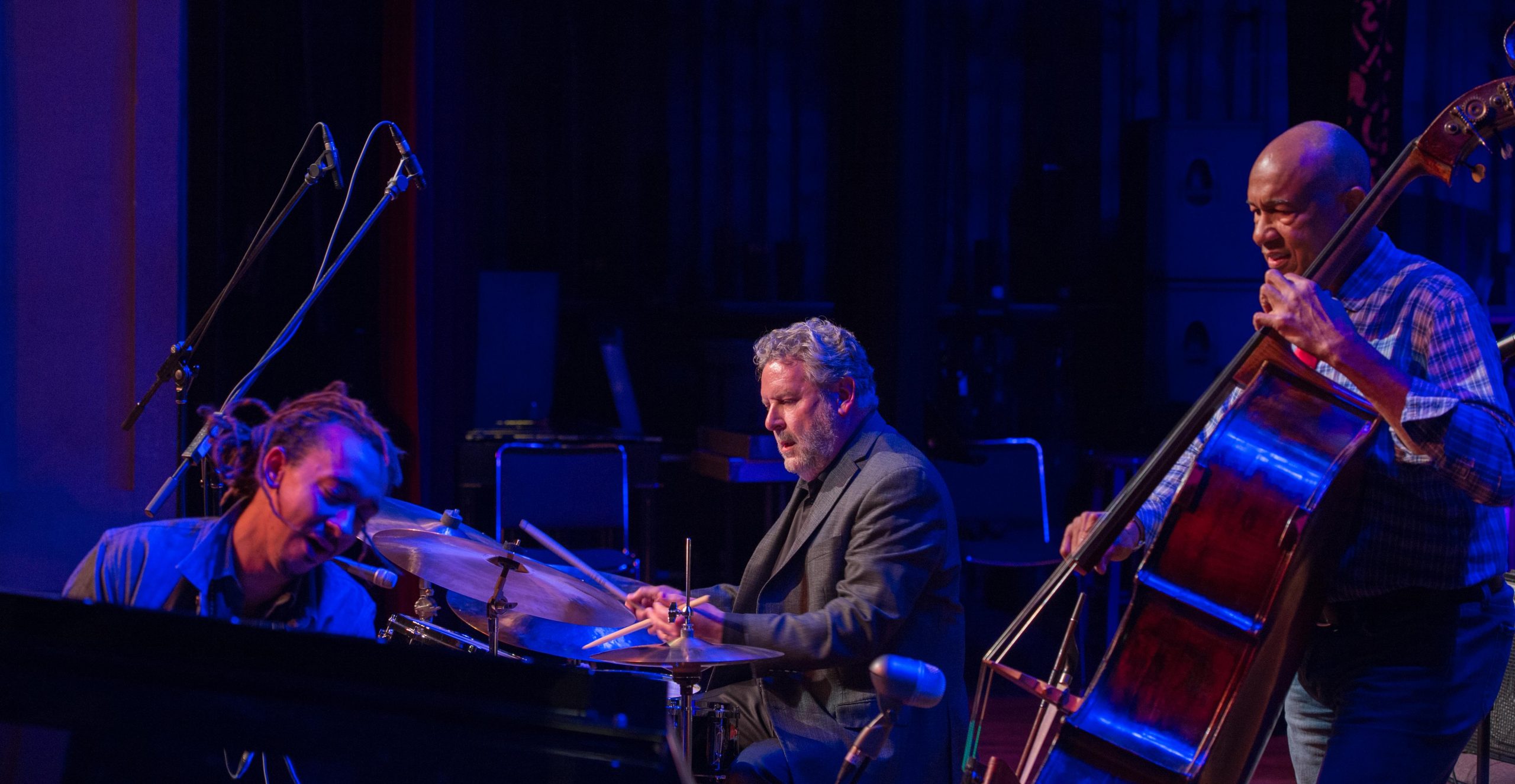 ABOVE: Gerald Clayton, Jeff Hamilton and John Clayton at the 47th Next Generation Jazz Festival on April 1, 2017. ©MJF/Nic Coury.

There’s family that you are born into, and then there’s your “chosen” family – an aligning of core values, principals and camaraderie that every person will seemingly gravitate towards during the course of their lives.

And then there’s Monterey.

In honor of our 60th festival, family is one the major themes that we are celebrating.

The selection of our Artists-In-Residence, John Clayton, Jeff Hamilton and Gerald Clayton is the the first time that a father and son has been selected in this role.

As Commission artist, John Clayton is writing Stories of a Groove: Conception, Evolution, Celebration for his Clayton-Hamilton Jazz Orchestra, which features the Gerald Clayton Trio as an underpinning ensemble within the big band.

Gerald Clayton has been performing at Monterey since he was in high school as a pianist with the award-winning Los Angeles County High School for the Arts Vocal Ensemble, both at the Next Generation Jazz Festival and at the Monterey Jazz Festival. More recently, he has performed with his own trio, with Charles Lloyd, and with the MJF On Tour in 2015-6. John Clayton and the Clayton-Hamilton Jazz Orchestra have performed many times at MJF, and this year’s commission piece will be his third for the festival.

BELOW: Luca Mendoza with the 2016 MJF Next Generation Jazz Orchestra; Vince Mendoza directing Jaco’s World at the 2015 Monterey Jazz Festival.

Pianist and composer Luca Mendoza is a two-time Next Generation Jazz Orchestra member (2016 and 2017) and is a graduate of the Crossroads School in Santa Monica. His Crossroads School Jazz ‘A’ Band won the 2017 Next Generation Jazz Festival’s High School Combo Division and will also be appearing on the grounds. He has won the 2017 Gerald Wilson Award for the second year in a row, with this year’s winning composition to be performed by the NGJO on Sunday, September 17 on the Jimmy Lyons Stage.

His father, Vince Mendoza, is a 6-time GRAMMY winning composer, arranger and conductor, and is an adjunct professor of Jazz Studies and Contemporary Music at the University of Southern California in Los Angeles. The group under his direction, the USC Thornton Jazz Composers Collective, won the College Combo Division at the 2017 Next Generation Jazz Festival, also earning a spot at MJF60. Vince has performed and conducted at the Monterey Jazz Festival many times, including 2011’s Still Ahead Orchestra and 2015’s Jaco’s World.

Pianist Eddie Mendenhall has long been a staple of the local Monterey music scene. A Next Generation Jazz Orchestra member in 1989 and 1990, Eddie spent years in Japan as a performer before returning the Monterey Peninsula. Eddie has become a MJF Traveling Clinician, and is an integral part of the Festival’s Jazz in the Schools and Summer Jazz Camp programs. His daughter, bassist Kanoa Mendenhall, spent many years as a participant in these programs, and became a Next Generation Jazz Orchestra member in 2015. Kanoa is on her way to making an impact on the local scene as an instrumentalist. Eddie and Kanoa are the only parent-child members of the NGJO since it was founded in 1971! They will both be playing with Andy Weis & the Monterey All-Stars at MJF60.