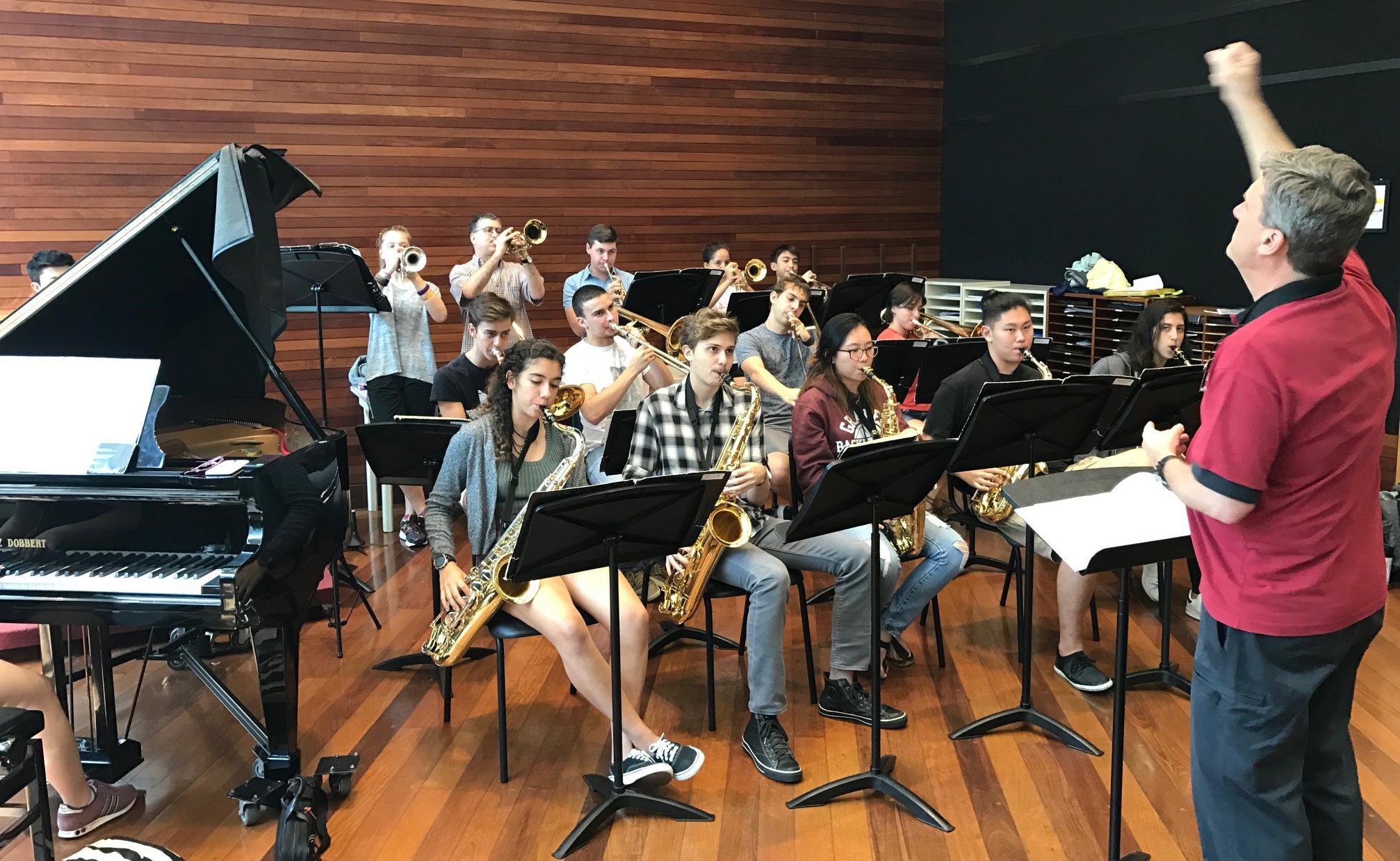 ABOVE: Robbie Stange conducts a band at the 2017 Graded Jazz Festival.

When jazz educator Robbie Stange arrived at Monterey High School as a music teacher in 1982, he faced a daunting challenge—the school had gone through four band directors in three years, and it was Stange’s mission to turn the music department around. Eventually, he built a program with an award-winning jazz band that served as its flagship ensemble, and through his association with the Monterey Jazz Festival, he would export those same principals over six thousand miles away to Brazil in a grand experiment for jazz education.

The 1980s were an era of dominance from Bay Area high school jazz powerhouses Aptos and Berkeley. Monterey High had not placed a student to the MJF’s Next Generation Jazz Orchestra since the middle of the 70s—in fact, students from Monterey County rarely made the band. But in 1983, MJF Board member Ruth Fenton asked: If schools in other counties were so strong musically, why can’t we do the same in our own back yard? The non-profit jazz festival’s mission and focus had always hinged on supporting local causes and organizations, but this shift in focus towards school programs could bring real results in creating jazz audiences and young talent.

“Their plan was to provide instruments, charts and other resources, along with a small team of professional clinicians to work with school jazz groups on an ongoing basis,” recalled Stange. Quickly expanding to support music programs in 20 schools in the county, the Traveling Clinicians became the centerpiece of the festival’s year-round education programs to cultivate young local players.

And it worked. Over the next 18 years, 33 musicians from Monterey County were accepted to the NGJO (many of them multiple times)—including 16 of Stange’s own students.

By 2000, Monterey High School had finally won first place at the Next Generation Festival in the High School Big Band Division, displacing Berkeley High. “I started to yearn for a change and a new challenge,” said Stange. “I considered starting a doctorate program, but I also was intrigued at the thought of teaching internationally.” At a recruitment fair, he encountered the Graded School, the American School of São Paulo, Brazil.

“They had ambitious plans to expand their arts program and to build a world-class arts facility, which I would personally have a hand in designing,” he remembered. Accepting their invitation to come to Brazil, he would bring aspects of the clinicians’ program to create a cultural exchange program that would be called the Graded Jazz Festival.

“My success at Monterey was hugely impacted by the support I received from the Monterey Jazz Festival, and I wanted to try to replicate some of those same magical experiences at Graded,” continued Stange. “At MJF’s summer camps, I impressed by how much could be accomplished through such an intensive, immersive program. The vernacular and nuances of jazz are tremendously subtle and very specific, and there are a multitude of skills and sensibilities that a young musician needs to have in order to make a real, genuine connection with this music. Bringing real jazz artists into the classroom is something I’ve sought to perpetuate through our own festival. It’s always been a tremendously valuable learning experience for everyone.”

ABOVE: Paul Contos conducts a workshop at the 2014 Graded Jazz Festival in São Paulo, Brazil.

The 2017 Graded Jazz Festival, now in its 16th year, will be visited by MJF Clinicians Paul Contos, Robynn Amy and Peck Allmond, and will conduct clinics, masterclasses, and one-on-one and section lessons. “Despite all of our resources,” continued Stange, “our music students don’t have the opportunity to attend contests or competitions…they don’t really have any sort of yardstick to measure themselves. This is why they enthusiastically embrace our annual jazz festival; they know they won’t have other opportunities like this.”

Approximately 75 middle and high school students from Peru, Bolivia, Caracas, Venezuela, Brazil, and other countries will be selected by leading local music educators to travel to São Paulo. “It’s fascinating to watch them work together. There is no language barrier when it comes to playing jazz!”

The Graded Jazz Festival takes place February 5-12, 2017 in São Paulo, Brazil, and will feature clinics, masterclasses, and a final concert with participating students.