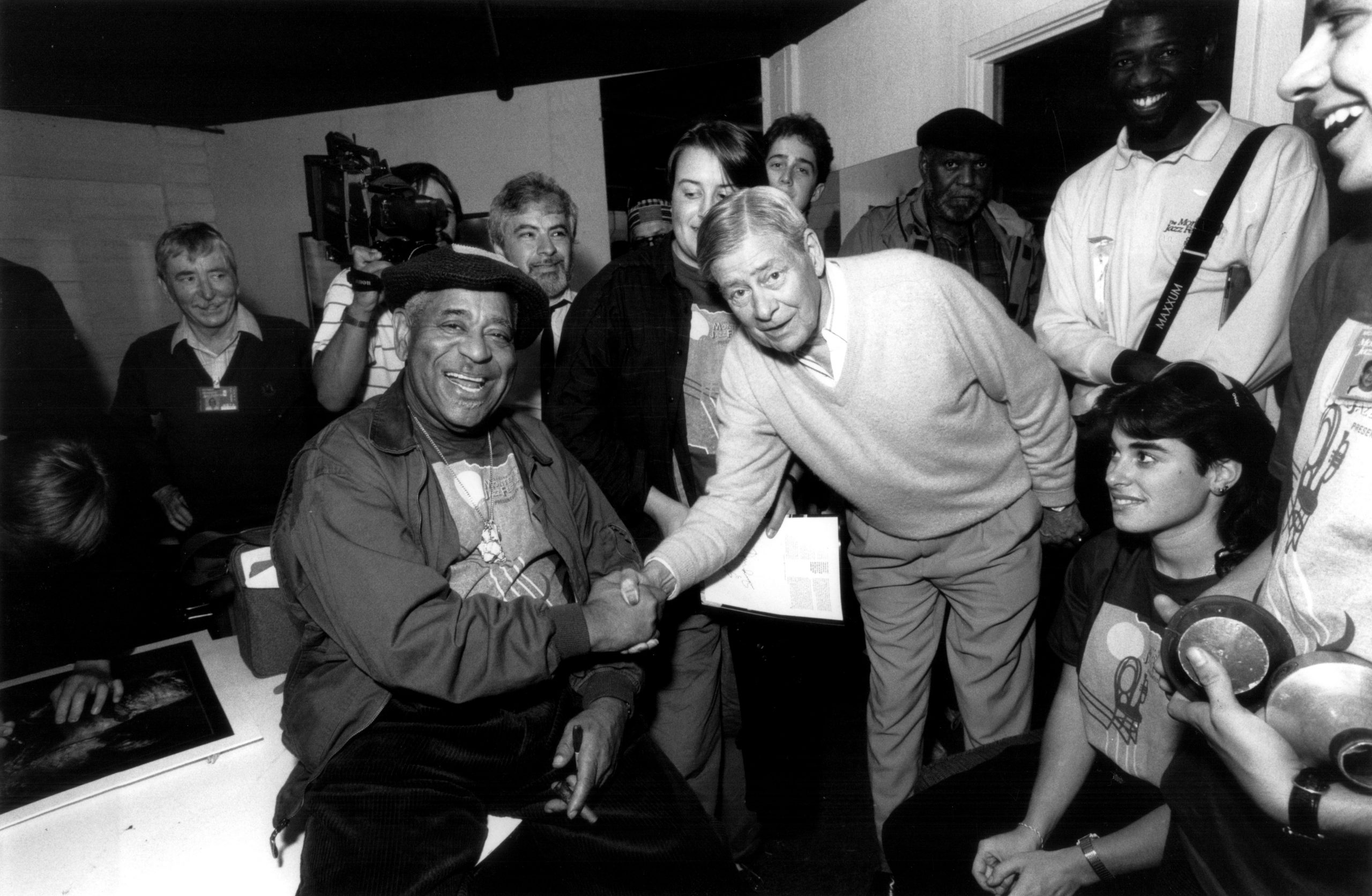 Among the jazz galaxy that has played the Monterey stages, Dizzy Gillespie is of Mount Rushmore status. —Willard Jenkins

October 21 marks the 100th anniversary of the birth of jazz giant Dizzy Gillespie. We wrote extensively about Diz and his influential history with the Monterey Jazz Festival back in February on our blog, and we featured the Kenny Barron Trio with special guests
Roy Hargrove, Sean Jones, and Pedrito Martinez on Friday, September 15, 2017 on the Jimmy Lyons Stage in the Arena for a special tribute. Ahead of that performance, we ran a video on the big screens with Mr. Barron explaining some of his history with Diz and MJF:

After MJF60, a longtime patron, Kit Sagen, sent a photograph he had taken at MJF35 in 1992. A transitional time for the festival, 1992 was the final year that MJF Founder Jimmy Lyons was General Manager, and the first year of the tenure of Tim Jackson as the Artistic Director. Dizzy was scheduled to perform as a soloist with the California High School All-Star Band (now called the Next Generation Jazz Orchestra), but he was too sick to perform.

He came onstage to visit with the band, to much applause and adoration. Less than four months later, he was gone.

Diz and Bill Berry were great friends, which was always wonderful to see. I had the enormous joy of working with Bill for 18 years, and we were amazed for years afterward about the very first time Dizzy worked with the All-Star Band in 1990.

The first day, Diz came in, and was sweet. He asked if everyone spoke English, then proceeded to get to work on the music. The chart was his piece, “Manteca.” For the very first hour in entirety, he worked with only one member’s playing of the piece – that of the drummer. And specifically, of only one piece of the drumset: the bass drum, and its role in the chart (very important!) I still remember after that full hour of Dizzy working nonstop with the drummer on the bass drum and his right foot, Bill and I just sat there shaking our heads at how intense the work was, and how meaningful. And, as a readout after the drummer really started to get what Dizzy wanted, how vital that ONE singular element was to the whole piece. What an amazing lesson in rhythm from a great master!

Along with many other tributes to Dizzy this year, there has been a recent documentary from 1990 that has been pointed out by Marc Myers of Jazzwax, called To Bop or Not to Be: A Jazz Life, by Norwegian director Jan Horne.

Marc has been celebrating Dizzy’s 100th with his own research, observations and career overview as well. Happy birthday, Diz!