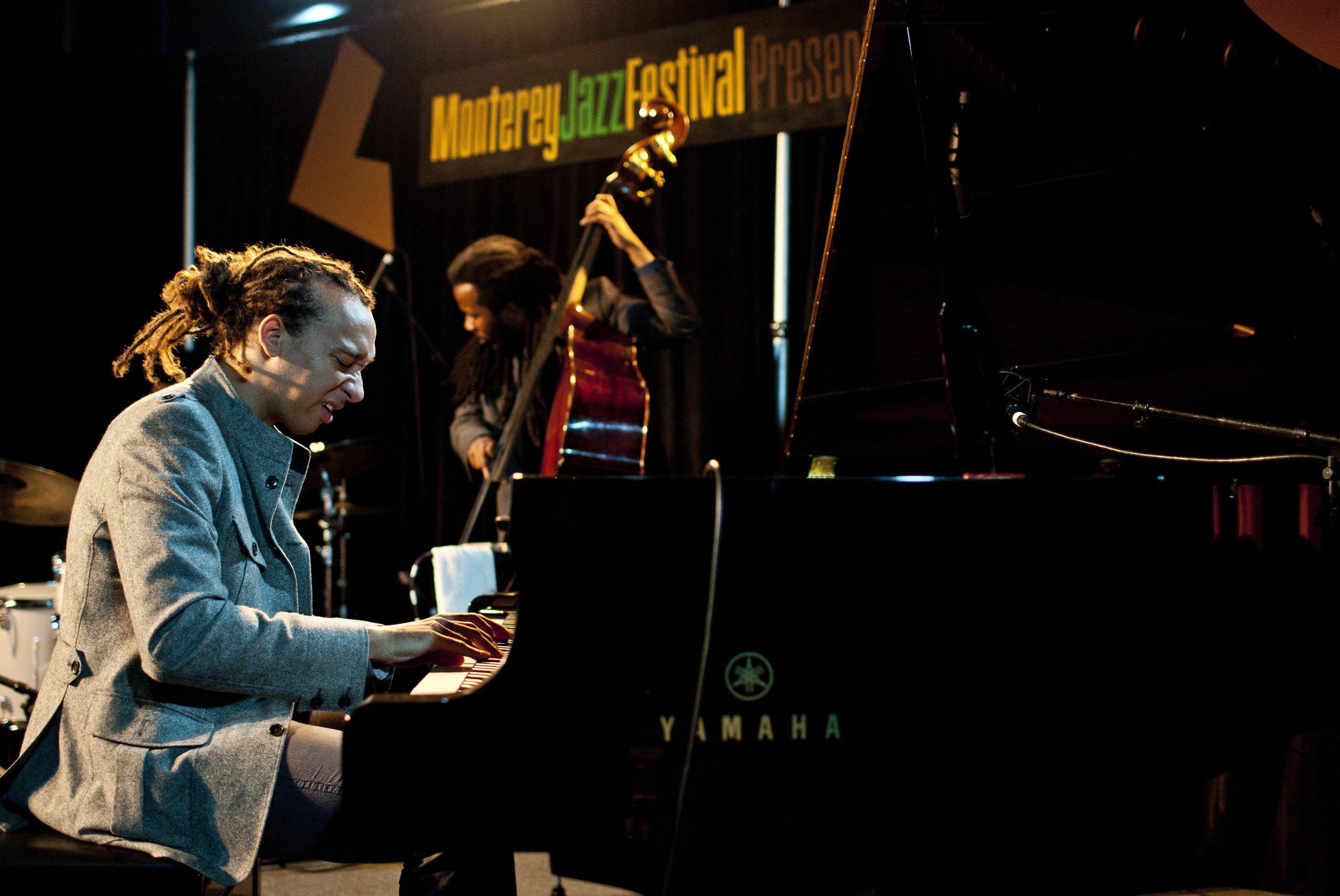 ABOVE: Gerald Clayton Trio at the 53rd Monterey Jazz Festival in 2010. This was the first of several of Gerald’s trio appearances at MJF. ©Cole Thompson

Our 2017 Artist-in-Residence, Gerald Clayton, has a long history with the Monterey Jazz Festival. In high school, Gerald attended the Los Angeles County High School for the Arts, and the LACHSA Vocal Ensemble won the High School Vocal Division at the 2000 and 2001 California High School Jazz Competition. At the time, the competition was held at the Monterey Fairgrounds, and Gerald had the opportunity to perform at the Monterey Jazz Festival in the fall. He also won several soloist awards and a scholarship to the Berklee Five-Week Summer Performance Program—awards that are still given to outstanding student musicians at the Next Generation Jazz Festival each year.

Gerald will be appearing with his father, John Clayton, and drummer Jeff Hamilton (the other 2017 MJF Artists-in-Residence) at this year’s Next Generation Jazz Festival, and will perform at the Friday Night Judges Concert on March 31 at the Golden State Theater in downtown Monterey.

In Part two of our interview with Gerald, we spoke about his first time at the NGJF and his subsequent appearance as a student at the Monterey Jazz Festival.

BELOW: Gerald Clayton and the Los Angeles County High School for the Arts Vocal Jazz Ensemble at the California High School Jazz Competition in 2000. ©Beth Peerless

Back in 2000 and 2001, you came to the Next Generation Jazz Festival as a student and won some awards.

Maybe the most exciting class school trip we had all year was the Monterey competition. It was a cool and special tradition we all had at my high school [Los Angeles High School for the Performing Arts]. I think there’s something really nice when you travel somewhere and then encounter other peers that are on the same journey and the same path, and share similar passions. I definitely remember that feeling…it wasn’t as much about the competition­—we want to win—it was like, “how cool is this, there are high school kids from all around that are trying to work it out.”

I remember being blown away by the Berkeley kids, that was my first time seeing Ambrose Akinmusire and Jonathan Finlayson—guys that I still see today. It still holds a special place in my memory and my heart, to be able to share that with my peers. It was that exciting feeling of a class trip that was like a school-away-from-school that became this social episode with all these teenagers going through all these changes. There was a real excitement about just getting on the bus and getting to stay in a motel across the street from the fairgrounds, and that freedom to go to Denny’s and hang with some of the other kids, and hearing some really great music.

BELOW: A snapshot of the 2000 Monterey Jazz Festival Program, which featured a recap of that year’s California High School Jazz Competition. Some familiar names would emerge during the next decade.

Was that your first tour?

I think it was one of the early ones away from Los Angeles. Most of my performance experience had been doing classical recitals, and that was one of the first times where I had to travel and play somewhere.

When did you first play at the Monterey Jazz Festival?

In 2000 as a high-schooler to the competition, and then playing with the LACHSA Vocal Jazz group at the main festival that year. So when I came, I had something to do. But I was in the audience every time, not a year goes by that I don’t see something that blows me away and gives some inspiration to take home.

It’s like the kids who travel to the NGJF are already at such a high level that it seems natural for them to come and play in front of a lot of people.

I don’t know about “natural,” but the nerves are definitely real. We all feel them and certainly felt them there. But I think that the excitement of being in that environment takes over. You end up wanting to be there, wanting to play, and do a good job. It was a really positive experience, all-in-all.

Do you have a MJF memory you can tell us?

I would say that the Monterey Jazz Festival is a unique gathering. There’s an energy about the entire weekend that you don’t get at the average jazz festival, probably because it’s been around so long. There’s a certain weight to it. It’s like walking into the Village Vanguard…you can feel the history. You can feel the spirits of Miles and ‘Trane and all these people who have blessed those stages. I think there’s this excitement, that same excitement that we had in high school. Even now when I go, every year, there’s such an amazing group of talent.

Some of the memorable experiences—besides running from one stage to the next to catch as much music as you can—or playing on one of the stages and seeing some of your heroes in the audience who have peeked in to check out a tune or two—is the hang afterwards, and the jam session at the hotel. I don’t remember what year I got hip to it, but there’s a bootleg floating around of Roy Hargrove at the Hyatt jam session, it holds up with some of the best records he’s ever done, because the energy is so live. If there were a way to put all of the music, like a microcosm into one weekend, that’s what you have at the festival. Huge variety, different sounds, different styles, all the greats and legends of music, unique performances that you won’t get to hear on the usual tour because of these commissions and things like that, and you have the hang, the jam sessions, and the party feel of the music. It’s safe to say that it’s one of the best festivals in the world.

BELOW: The poster for the 43rd Annual Monterey Jazz Festival in 2000.