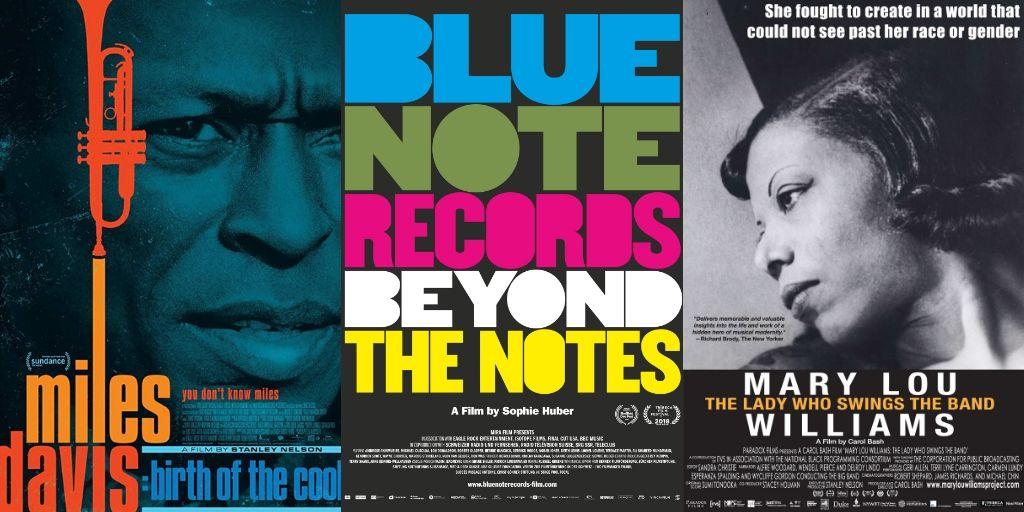 Each year at the Monterey Jazz Festival, we show feature-length films about the artform in the Jazz Theater between the simulcasts from the Arena. Located on the Midway, next to the Pacific Jazz Café, the Jazz Theater is a place where you can watch a movie if you need a break from the music. In 2019, we are pleased to have our own three-day film series by screening a movie each day of the Festival, which is a first. We will also have a photo exhibit of iconic shots from Kuumbwa Jazz Center in the Pacific Jazz Café, so you can see the music as much as you hear it!

The central theme of Miles Davis’s life was his restless determination to break boundaries and live life on his own terms. It made him a star—it also made him incredibly difficult to live with, for the people who loved him most. Again and again, in music and in life, Miles broke with convention—and when he thought his work came to represent a new convention, he changed it again. Miles’s bold disregard for tradition, his clarity of vision, his relentless drive, and constant thirst for new experiences made him an inspiring collaborator to fellow musicians and a cultural icon to generations of listeners. It made him an innovator in music—from bebop to “cool jazz,” modern quintets, orchestral music, jazz fusion, rock ‘n’ roll, and even hip-hop. Featuring never-before-seen archival footage, studio outtakes, and rare photos, Miles Davis: Birth of the Cool tells the story of a truly singular talent and unpacks the man behind the horn.

Blue Note Records: Beyond the Notes explores the unique vision behind the iconic jazz record label. Through rare archival footage, current recording sessions and conversations with Blue Note artists, the film reveals a powerful mission and illuminates the vital connections between jazz and hip hop.

One of the most important record labels in the history of jazz — and, by extension, that of American music — Blue Note Records has been home to such groundbreaking artists as Miles Davis, Thelonious Monk, John Coltrane, Bud Powell and Art Blakey, as well as present-day luminaries like Robert Glasper, Ambrose Akinmusire and Norah Jones. Founded in New York in 1939 by German Jewish refugees Alfred Lion and Francis Wolff, the history of Blue Note Records goes beyond the landmark recordings, encompassing the pursuit of musical freedom, the conflict between art and commerce and the idea of music as a transformative and revolutionary force. Through rare archival footage, current recording sessions and conversations with jazz icons Herbie Hancock, Wayne Shorter and today’s groundbreaking Blue Note musicians, Blue Note Records: Beyond the Notes reveals a powerful mission and illuminates the vital connections between jazz and hip hop.

Mary Lou Williams: The Lady Who Swings the Band is a story of tragedy and triumph seen through the eyes of a prodigy. We journey the 20th century through the lens of one of its leading jazz musicians who is determined to create in a world that could not see past her race or gender.

Mary Lou Williams was ahead of her time, a genius. During an era when jazz was the nation’s popular music, she was one of its greatest innovators. As both a pianist and composer, she was a wellspring of daring and creativity who helped shape the sound of 20th century America. And like the dynamic, turbulent nation in which she lived, Williams seemed to re-define herself with every passing decade. From child prodigy to “Boogie-Woogie Queen” to groundbreaking composer to mentoring some of the greatest musicians of all time, Mary Lou Williams never ceased to astound those who heard her play. But away from the piano, Williams was a woman in a “man’s world,” a black person in a “whites only” society, an ambitious artist who dared to be different and struggled against the imperatives of being a “star.” Above all, she did not fit the (still) prevailing notions of where genius comes from or what it looks like. Time and again, she pushed back against a world that said, “You can’t” and said, “I can.” It nearly cost her everything.