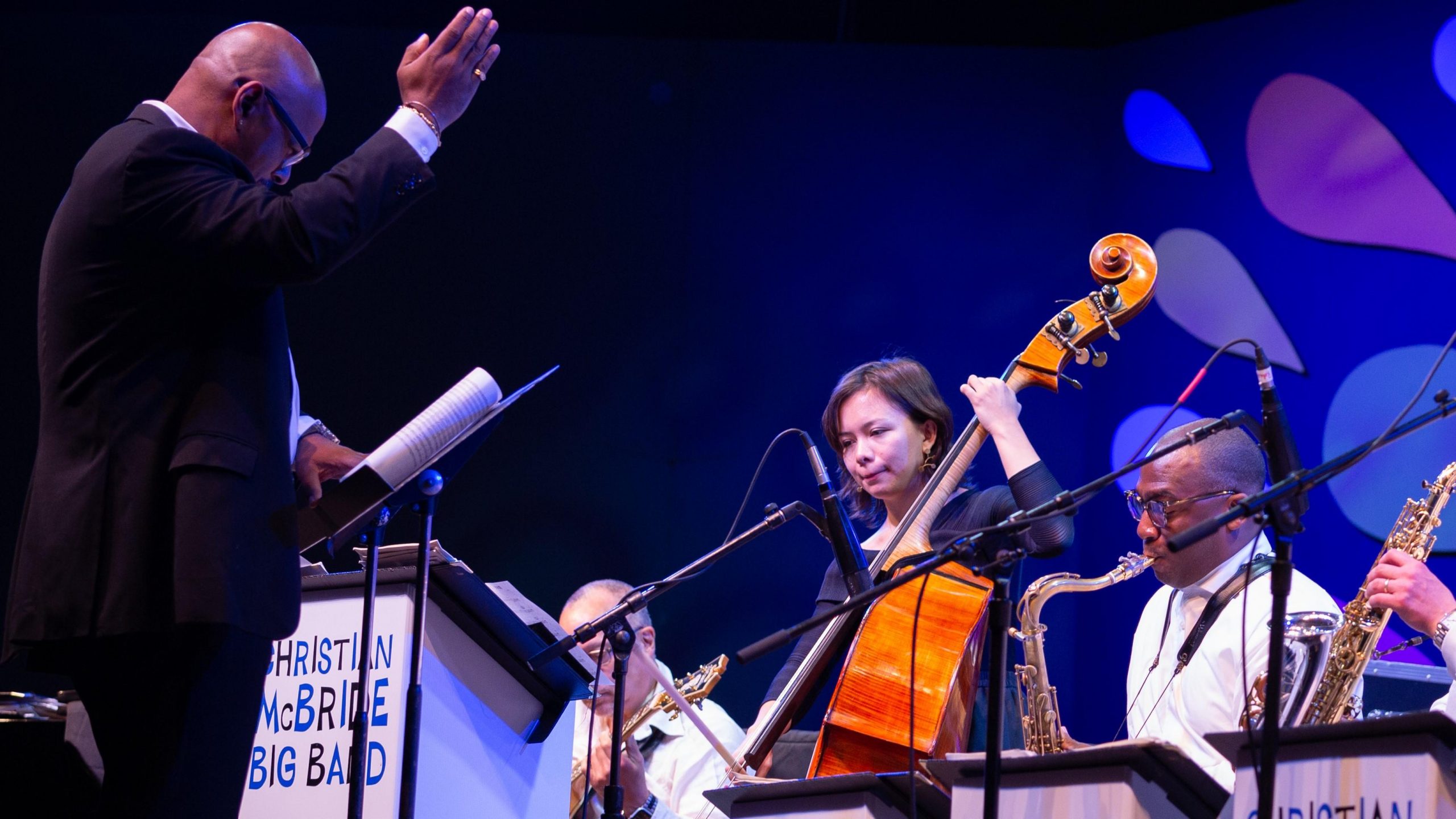 ABOVE: Christian McBride conducting his big band for the premiere of “Roy Anthony: The Fearless One.”

The 62nd Monterey Jazz Festival came to a close on September 29, and was an inspiration to many people, especially for those who know our jazz education alumni. In the center of it all was Kanoa Mendenhall, who played six sets on the Yamaha Courtyard Stage all weekend and performed with vibraphonist Sasha Berliner on Saturday night, September 28. But that was just the beginning.

Saturday night’s Arena show also featured the debut of the Showcase and Commission artist Christian McBride’s big band’s tribute to the late Roy Hargrove, entitled “Roy Anthony: The Fearless One.” The thrilling moment of the evening came at the announcement of McBride’s premiere when he brought out 22-year-old bassist, MJF alumni and Monterey native to perform the commission piece while he conducted his orchestra.

Recommended to McBride by MJF Artistic Director Tim Jackson as a rehearsal bassist the day before, Mendenhall was surprised backstage to hear her name being called out to play. “I was just expecting to play the rehearsal, I didn’t know I was going to play the show,” said Mendenhall to KSBW-TV. “I sight read the music at the moment, so it was a little nerve wracking, but I think I made it through.”

Next Generation Jazz Orchestra director Paul Contos said, “The word nervous or anything like that doesn’t come to mind when you think of Kanoa.”

Kanoa being interviewed by KSBW. Click on the image to watch the story.

Kanoa has long been known to the Montetrey family and community. Both her father Eddie and Kanoa were members of MJF’s Next Generation Jazz Orchestra in the past (in 1989-90 and 2015) and are the only parent-child members of the band since it was formed in 1971. She’s been part of our Monterey County All-Star Bands and a longtime student at our Summer Jazz Camps for many years. She recently graduated from Columbia University in 2019 and embarked on her first international tour.

In his review for the San Francisco Classical Voice, and Andy Gilbert wrote this of Kanoa’s unexpected debut: The first act heard by early festival-goers on Friday was the duo of persuasively swinging Monterey pianist Eddie Mendenhall and his daughter, 22-year-old bassist Kanoa Mendenhall, a player who is rapidly establishing herself on the New York scene. Camped out on a small outdoor stage in the middle of the fairgrounds’ permanent food court, they played six half-hour sets throughout the weekend, focusing mostly on standards. But Kanoa made her presence felt far beyond the duo. On Saturday, she anchored a pleasingly eclectic set in the Pacific Jazz Café led by Oakland-raised vibraphonist Sasha Berliner, who, like Mendenhall, played in the SFJAZZ High School All-Stars. But it was her unbilled performance in the main arena that provided one of the festival’s most dramatic moments.

Before premiering his festival commission, bassist Christian McBride and his big band warmed up with several surging pieces of post-bop, including a lithe arrangement of Joe Henderson’s “Black Narcissus” featuring the brawny tenor saxophone work of Keith Loftis. Calling Kanoa out to the stage and handing her his bass, McBride conducted the band through his tribute to his late comrade and dear friend, Roy Hargrove. The three-part suite “Roy Anthony: The Fearless One” evoked the trumpeter’s many moods, with a swaggering hard bop, a pacific ballad section, and some deep RH Factor grooving. Through it all, Kanoa kept the pulse buoyant and supple, her thick, rounded notes providing a pliable foundation for the roaring orchestra. Pressure, what pressure?

Eddie and Kanoa Mendenhall at the Yamaha Courtyard Stage during MF62. They performed six sets over the weekend. ©Jim Stone

Kanoa with Sasha Berliner in the Pacific Jazz Cafe at MJF62. Morgan Guerin in on the right. ©Jim Stone.