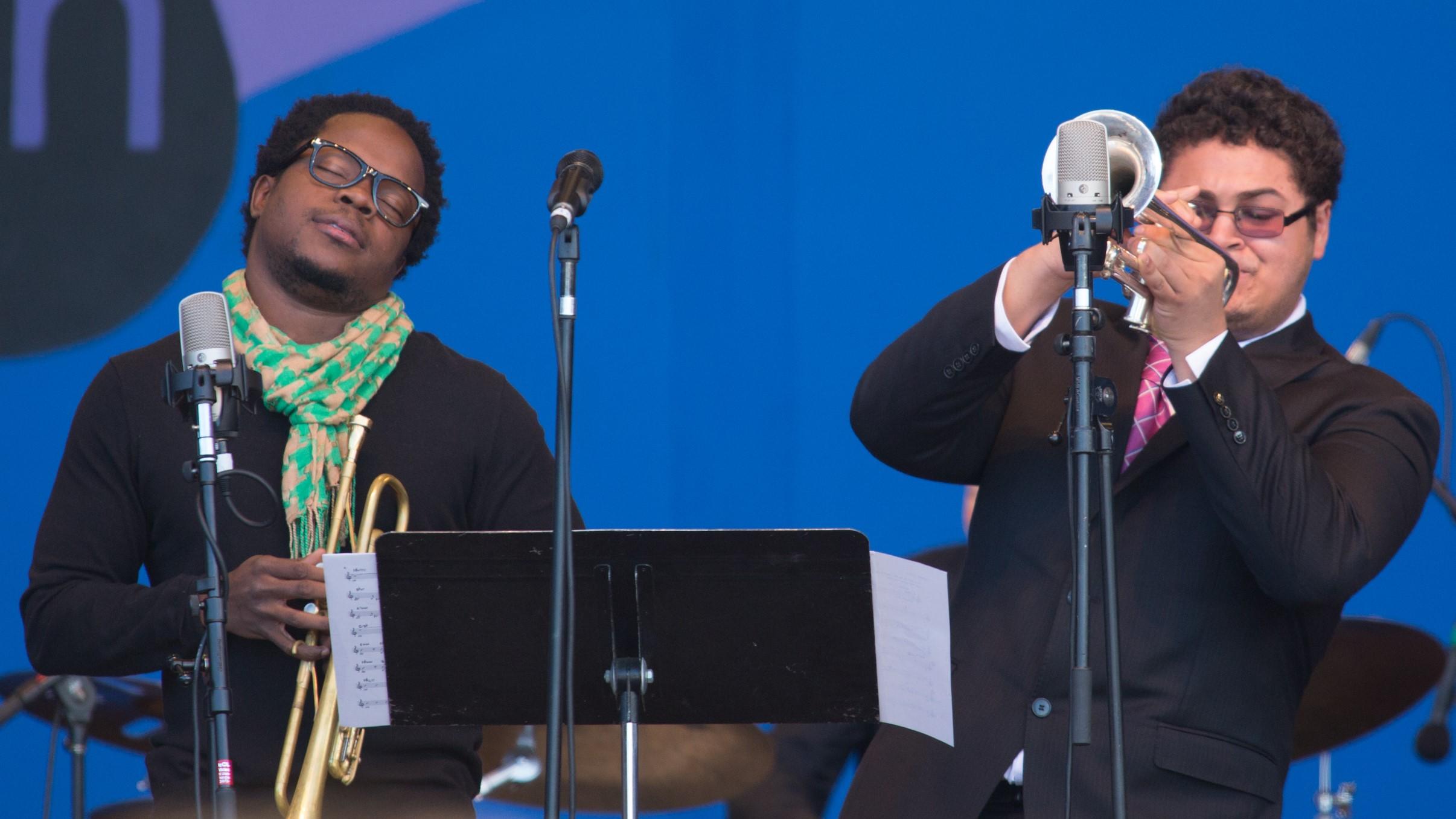 ABOVE L-R: Ambrose Akinmusire and Adam O’Farrill (Next Generation Jazz Orchestra member) at MJF55 in 2012. Both will be performing at MJF62 this year. Photo ©Tomas Ovalle

Every year at the Monterey Jazz Festival, we see and hear our alumni from our jazz education programs returning to our stages as leaders, sidemen, or in special projects. In 2019, MJF62 has have many artists who are coming back to present their ever-evolving artistry — some have appeared many times since their high school days, and some are coming back for their first time. In the next series of blogs, we will highlight them, some of their accomplishments, and their connection to MJF’s life-changing education programs.

Trumpeter Ambrose Akinmusire has done it all. He was a student in the mighty Berkeley High School bands that reigned for many years at the Next Generation Jazz Festival (NGJF) in the late 1990s and early 2000s. He was also a Next Generation Jazz Orchestra (NGJO) member in 1999 and 2000, and attended the Manhattan School of Music and USC before he won the Thelonious Monk Competition and the Carmine Caruso International Jazz Trumpet Award in 2007. In 2012, Ambrose was the Festival’s Artist-in-Residence, and in 2015, his MJF58 Commission piece, The Forgotten Places, made a strong impression on the audience in the Arena. He made his Blue Note Records debut in 2011 and has always pushed the limits of what jazz can be — he’ll be presenting his latest work for Blue Note, Origami Harvest on Sunday night, September 29 on the Garden Stage at 7:45pm.

Ambrose will have his fellow Berkeley High classmate with him, drummer Justin Brown in the band. Justin is one of the monsters of jazz today — he was a Next Generation Jazz Orchestra member in 2000 and has since gone on to become one of the most in-demand drummers of his generation, playing and recording with Ambrose, Thundercat, Gerald Clayton, Christian McBride, Stefon Harris, Kenny Garrett, Esperanza Spalding, and Vijay Iyer. He additionally leads his own group, Nyeusi. Justin went to the Brubeck institute and then Julliard, and his limitless style has incorporated straight-ahead jazz, hip-hop and other contemporary influences that seamlessly blend together.

Another NGJF alumnus in the late 90s, pianist Gerald Clayton has become one of the leading composers of his generation. It’s only natural since he comes from a family of musician/composers. When he came to the NGJF with the Los Angeles County High School for the Arts, he began to win the festival’s coveted soloist awards. After attending USC, Gerald attended Manhattan School of Music where he studied with Kenny Barron. Since launching his career, he’s played or recorded with Diana Krall, Roy Hargrove, Ambrose Akinmusire, Dianne Reeves, Terri Lyne Carrington, and many others, earning four Grammy nominations in the process. Recently, he’s been seen in duo with the tenor saxophone master, Charles Lloyd. Gerald and his father, John Clayton, and drummer Jeff Hamilton were the Artists-in-Residence at MJF60 in 2017, and performed their commission piece, Stories of a Groove. Gerald plays Friday night on the Garden Stage at MJF62.

Drummer Kendrick Scott will be performing with Gerald’s quartet at MJF62. Kendrick first appeared at MJF as the drummer in the Berklee-Monterey Quartet in 1999, with additional appearances in 2000 and 2002. Quickly becoming a top drummer in jazz, Kendrick represented MJF on Tour in 2007 with an all-star, Grammy-winning band that featured Terence Blanchard, James Moody, Benny Green (himself a 1978 NGJO alumnus); Derrick Hodge and Nnenna Freelon. In addition, Kendrick played a month-long stint with the MJF on Tour in 2016, which featured the Gerald Clayton Trio with Raul Midón, Ravi Coltrane, Nicholas Payton, and Joe Sanders. He’s also acted as a judge at the NGJF for several years, and his swinging, crisp, lyrical style makes him an all-around first-call drummer today. Kendrick leads his own group, Oracle, and he’s appeared at MJF many times.

Pianist James Francies was a 2013 NGJO member, and he blew some people’s minds at MJF56. He’s since toured and recorded with Eric Harland, The Roots, Jeff “Tain” Watts, Pat Metheny, Chris Potter, Chris Dave and Drumhedz, and fronts his own band, Kinetic. He’s won so many awards, it’s hard to list them all – but he was signed to the famed Blue Note label, and frequently collaborates with drummer/producer ?uestlove of the Roots on numerous projects such as music for commercials, film scores, and singles for different artists. At MJF62, he plays with Chris Potter on Friday in Dizzy’s Den, where he will definitely blow your mind.