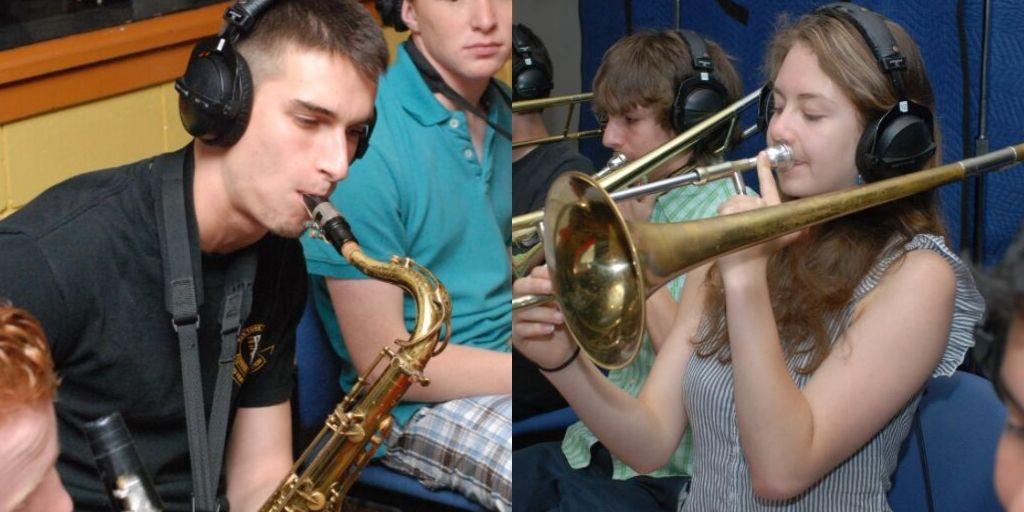 ABOVE L-R: Chad Lefkowitz-Brown and Natalie Cressman with the 2008 Next Generation Jazz Orchestra at a Berklee College of Music recording session. ©Monterey Jazz Festival Archives

Continuing on from our previous blog, we explore some of the artists performing at MJF62 as leaders or sidemen who have a past history with the Monterey Jazz Festival’s education programs. Many of the players were members of our Next Generation Jazz Orchestra, which selects the top players on the country for an all-star student ensemble that tours the United States and abroad. Don’t miss these fabulous musicians you may not know about at Monterey!

A Berkeley native, trumpeter Steven Bernstein was a member of the 1978 Next Generation Jazz Orchestra, along with fellow classmate Benny Green. In that year’s program, he’s shown wearing a tuba on his head, a subversive expression that would define his career through his musical association with the Hieroglyphics Ensemble, the Lounge Lizards, Sexmob, Henry Butler, Disaspora, Bill Frisell, and many others. Taking older jazz traditions and combining them with modern and avant-garde styles, Steven’s Millennial Territory Orchestra West is a delightful showcase of his witty, genre-crossing, and sometimes irreverent approach to writing and arranging music. MTO West plays on Saturday night on the Garden Stage.

Trombonist, singer and songwriter Natalie Cressman was a 2008 Next Generation Jazz Orchestra member and is the daughter of frequent MJF performer, vocalist Sandy Cressman. After graduation from high school in San Francisco, she went to New York City to study at the Manhattan School of Music where she met jam band pioneer and Phish leader, Trey Anastasio. He recruited her for his touring band, and she’s stayed in the spotlight and on the road since then — collaborating with some of the most illustrious figures in rock, funk, jazz and beyond: Phish, Big Gigantic, Carlos Santana, Escort, Wycliffe Gordon, Nicholas Payton, Anat Cohen, and many others. Still very connected to jazz, at MJF62 she brings her quiet but powerful Brazilian duo with guitarist Ian Faquini to Dizzy’s Den on Saturday afternoon, September 28.

Tenor saxophonist Chad Lefkowitz-Brown, now going by Chad LB, was also a 2008 Next Generation Jazz Orchestra member with Natalie Cressman. After his time in the NGJO, Chad became a Fellow at the Brubeck Institute and has since become a prominent educator, clinician, and solo artist. He adjudicated our 2014 Next Generation Jazz Festival, and he’s also on faculty at the San Francisco Conservatory as a visiting artist. In addition to his albums showing up on critics best-of lists, Chad has toured globally as a soloist and with numerous jazz artists and pop icons ranging from Arturo O’Farrill to Taylor Swift. He returns to MJF62 to perform with Chris Botti, the largest-selling American instrumental artist on Saturday, Sept. 28 in the Arena.

ABOVE L-R: Chase Baird with the 2005 Next Generation Jazz Orchestra and a recent pic. ©Cole Thompson and Wikipedia Commons.

Tenor saxophonist Chase Baird was a 2004 and 2005 Next Generation Jazz Orchestra member. Born in Seattle, Chase grew up in Salt Lake City, Utah and at age 14, he was mentored by the late saxophonist, Michael Brecker. He attended CSU Long Beach, and later moved to New York City, where he enrolled at Julliard. On the day he graduated, he met the pianist Brad Mehldau which led to a musical relationship. He’s also performed with heavyweights as a sideman, including Christian McBride, Mike Stern, the Mingus Big Band, Chaka Kahn, Jakob Dylan, and many others. In 2018, he began to co-lead the band Vanture with legendary jazz and funk drummer Mike Clark, and that same year, he was asked to join Antonio Sánchez & Migration. His big bold sound can be heardat MJF62 on Sunday in Dizzy’s Den and on his new solo album, A Life Between, to be released in August 2019.