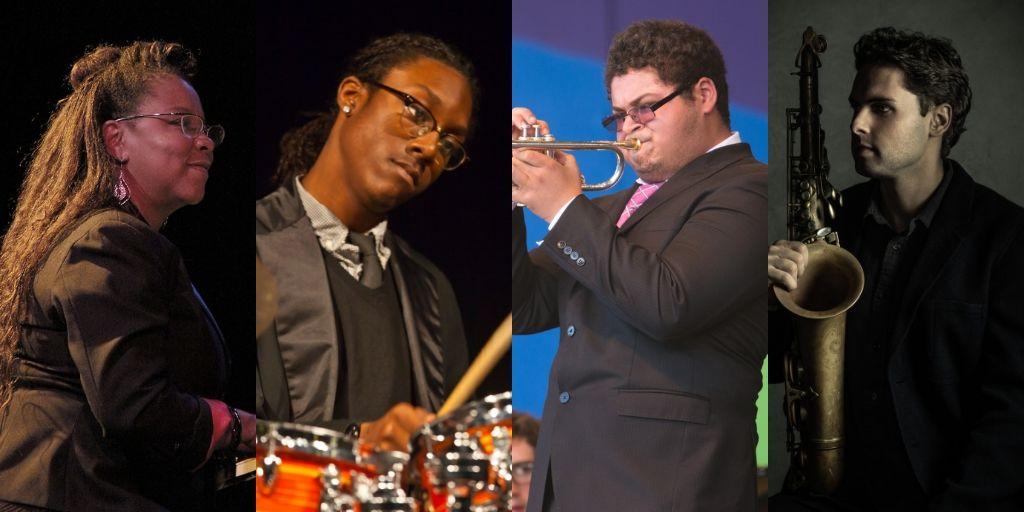 Continuing with our third installment of a four-part blog about the MJF education alumni who are returning to MJF62 for performances, we are proud to feature some of the musicians that have gone on to make significant contributions to the world of jazz and beyond. We hope you enjoy these talented musicians as much as we do, and we are looking forward to having them back on the MJF stages, September 27-29, 2019.

L-R: Patrice Rushen at MJF15 in 1972, at at the 2013 Next Generation Jazz Festival. Photos ©MJF Archives and Edie Ellis

Pianist and composer Patrice Rushen is one on the most lauded alumni of the Next Generation Jazz Orchestra, as a recent profile in the New York Times will show. DownBeat recently wrote about her career in light of the release of Remind Me (The Classic Elektra Recordings, 1978–1984). She was the pianist in the 1972 NGJO, and her combo from Alain Locke High School on Los Angeles won their division at second Next Generation Jazz Festival that same year. She went on to have a career in both jazz and R&B, with her biggest hit being the classic track “Forget Me Nots” which, aside from being a #2 single on the US Dance Charts, it was notably used in the smash film Men in Black in 1997. But she’s stayed close to jazz and MJF, acting as a judge at the Next Generation Jazz Festival in recent years and is the chair of the Popular Music Department at USC. She’s appeared with Christian McBride with his Situation band at MJF in 2005, as she will again at MJF62 on Friday night in Dizzy’s Den.

Drumming since the age of two, virtuoso Mike Mitchell first came to Monterey in 2012 as a member of the jazz combo from the Booker T. Washington High School for the Performing and Visual Arts in Dallas, Texas, where he won a soloist award. As a student, he’s also won 14 DownBeat Music Awards and since then, he’s performed/toured with Kamasi Washington, Chrisette Michele, Derrick Hodge, Gerald Clayton, Antonio Hart, Spirit Fingers (formerly known as The Polyrhythmics), Seven Davis Jr., The New World Order, and the legendary Stanley Clarke. His band, Blaque Dynamite, released their second album, Killing Bugs in 2017, the same year he appeared at MJF60 with bassist Derrick Hodge. His no-holds-barred style will blow you away! Catch him at 5:15 pm with Derrick Hodge in Dizzy’s Den. on Saturday, Sept. 28.

Trumpeter Adam O’Farrill was a 2011 and 2012 Next Generation Orchestra member and played a thrilling duel with Ambrose Akinmusire at MJF55 in 2012. He comes from a long line of musicians: His father is composer and pianist Arturo O’Farrill, and his grandfather is Afro-Cuban-Irish composer and arranger Chico O’Farrill. Adam attended the Manhattan School of Music, received the 2013 ASCAP Herb Albert Young Jazz Composer Award in 2013, and won third place honors at the Thelonious Monk Institute Jazz Trumpet Competition in 2014. In 2015, he appeared on Rudresh Mahanthappa’s critically-acclaimed Bird Calls and Arturo O’Farrill’s Cuba: The Conversation Continues. He also toured with Mahanthappa’s band for three years, which included a performance at MJF58 in 2015. Recently, his band, Stranger Days, has released several critically acclaimed records, including El Maquech (2018, Biophilia). His highly original voice can be heard with Allison Miller’s Boom Tic Boom Saturday night, Sept. 28 in the Night Club.

L-R: Ben Flocks with the 2006 Next Generation Jazz Orchestra in Europe, and a recent publicity shot. Photos ©MJF Archives and Dan Winters.

The Santa-Cruz born saxophonist and composer Ben Flocks was a 2006 Next Generation Jazz Orchestra member and a Fellow at the Brubeck Institute at the University of the Pacific. He then attended the New School in New York City and released his debut record, Battle Mountain. For the last several years, he’s been a member of the innovative music and theater group Sammy Miller and the Congregation (Sammy is also a NGJO Alumni from 2009!) but he has continued to lead his own groups. Appearing at MJF62, Ben will bring his new project, Mask of the Muse on Saturday, Sept. 28 in the Pacific Jazz Café. Welcome back! Ben’s performance in the viral video “History of the Saxophone” is also a great watch!