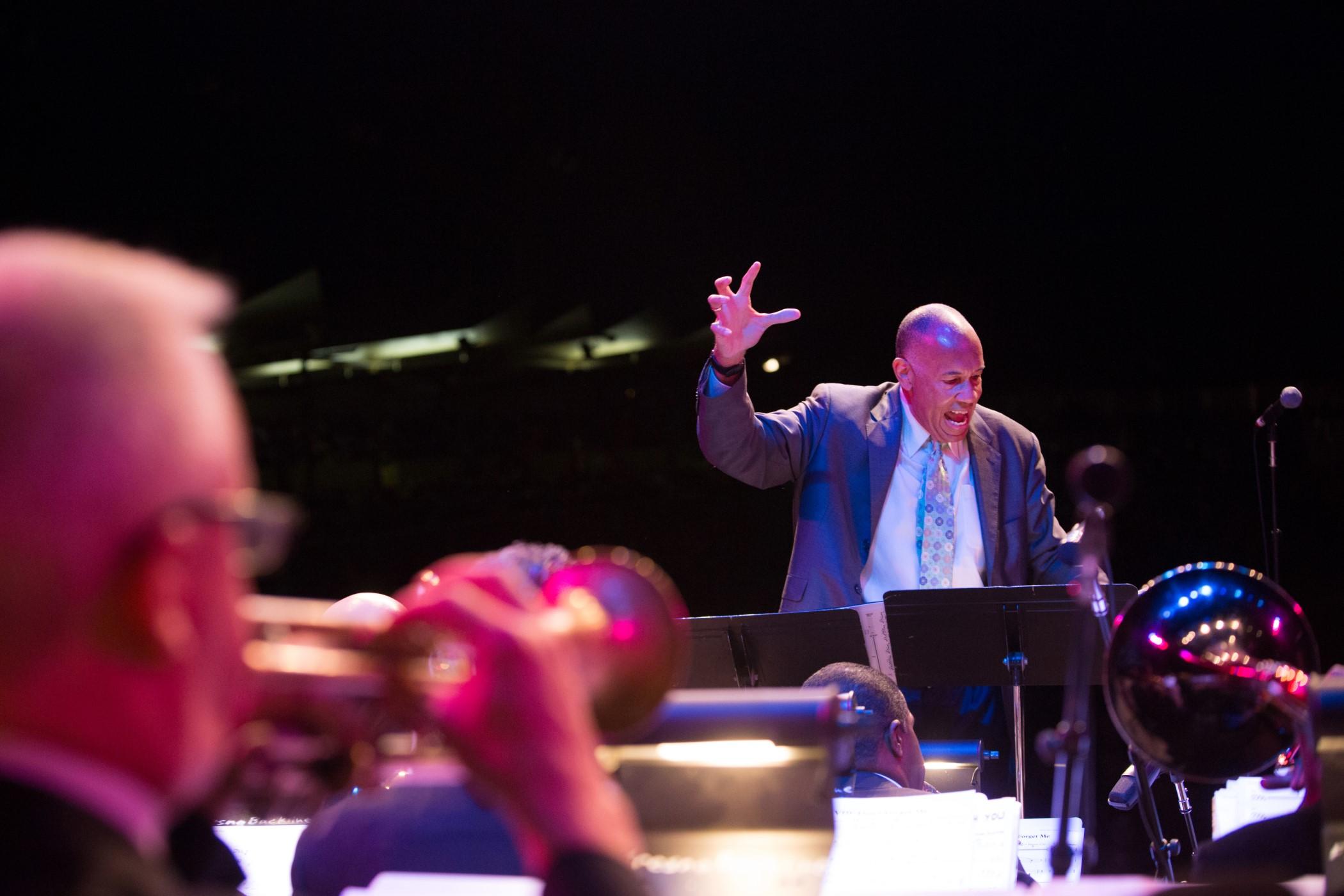 ABOVE: Bassist and composer John Clayton will write the 2017 Monterey Jazz Festival Commission.

On January 23, 2017, we sent out a national press release announcing a $30,000 Arts Work grant the Monterey Jazz Festival had received from the National Endowment for the Arts to support the yearly Commission Artist program. In 2017, the piece will be composed by bassist John Clayton as composing a new work for his Clayton-Hamilton Jazz Orchestra. The soon-to-be-titled piece will feature John’s son, Gerald Clayton and his Trio as a centerpiece ensemble within the orchestra, and will be debuted at the 60th Monterey Jazz Festival in September.

As soon as the press release went out, we began to get feedback from journalists and friends of the festival across the country:

Wow! GREAT!!! Thanks for this uplifting piece of news!
Total Congratulations!!!!!
Awesome news to read about the Jazz Festival!! Such a great thing.
Congratulations! Long live the NEA and Monterey
Congratulations on the NEA grant. Superb news in our challenging arts climate of planning and survival.
Good timing! NEA may be on the way to being dismantled. 🙁
Great, Tim!! At least while there still is an NEA …:)
Wonderful, Tim!!! Good for you.
Fantastic!!
Just in the nick of time before it gets defunded

Some of the responses reflected a growing unease with the future of the funding of the NEA in present times, which had been reported to be slashed in The Hill and in other online publications.

The NEA, on their website, expressly supports three missions with Music Grants: To advance learning, to fuel creativity, and to build the field. Several points on their music fact sheet state that:

The Monterey Jazz Festival’s funding from the NEA, while it may support a particular artistic or educational program, doesn’t tell the whole story how supporting arts and music builds our communities to foster understanding, diversity, creativity, and just plain fun for people to experience. You would have to come to Monterey and see the impact these important grants have had on our community and see that the NEA’s mission is the Monterey Jazz Festival’s mission.

When the arts are supported in communities across the country, everybody benefits. A vibrant arts community is what draws people to certain locations of the country to live (Portland, Oregon and Austin, Texas are examples) and the Monterey Peninsula is also an iconic arts and science community, with the painterly Carmel-by-the-Sea, and the Monterey Bay Aquarium drawing thousands of people by reputation alone.

For example, the NEA has helped support artistic programming for the Monterey Jazz Festival to bring out the NEA Jazz Masters that are selected by committee—it’s the highest honor bestowed on a jazz musician. In 2016, Monterey was able to present Quincy Jones, Toshiko Akiyoshi, Hubert Laws, Branford Marsalis, and Wayne Shorter with help from NEA Grants – to showcase groundbreaking and legendary artists to the Monterey audiences.

The Monterey Jazz Festival has also contributed to the arts community of the Monterey Peninsula since 1958 by presenting the top names in jazz—from NEA Jazz Masters and emerging talent to truly create a three-day immersion in jazz that has been voted as “Best Festival” over and over again by JazzTimes. The fact that funding from the NEA can a big part of how organizations run is also why those same organizations can become leaders in their communities In the Monterey Jazz Festival’s case, we have been using the proceeds of each festival to support year-round educational programs for youth—“paying if forward” so to speak in order to keep jazz music vibrant, and to serve the needs of our local community into the future.

In fact, many of the Jazz Festival’s scalable and modular education programs, such as our Next Generation Jazz Festival and Monterey Jazz in the Schools program have been copied and replicated across the country to jumpstart their own music programs and to benefit local communities, since the early 1970s.

Government funding from the NEA isn’t a one-time cash-out for non-profits. When we use funding to grow a vibrant long-term arts community for everyone, we all win.