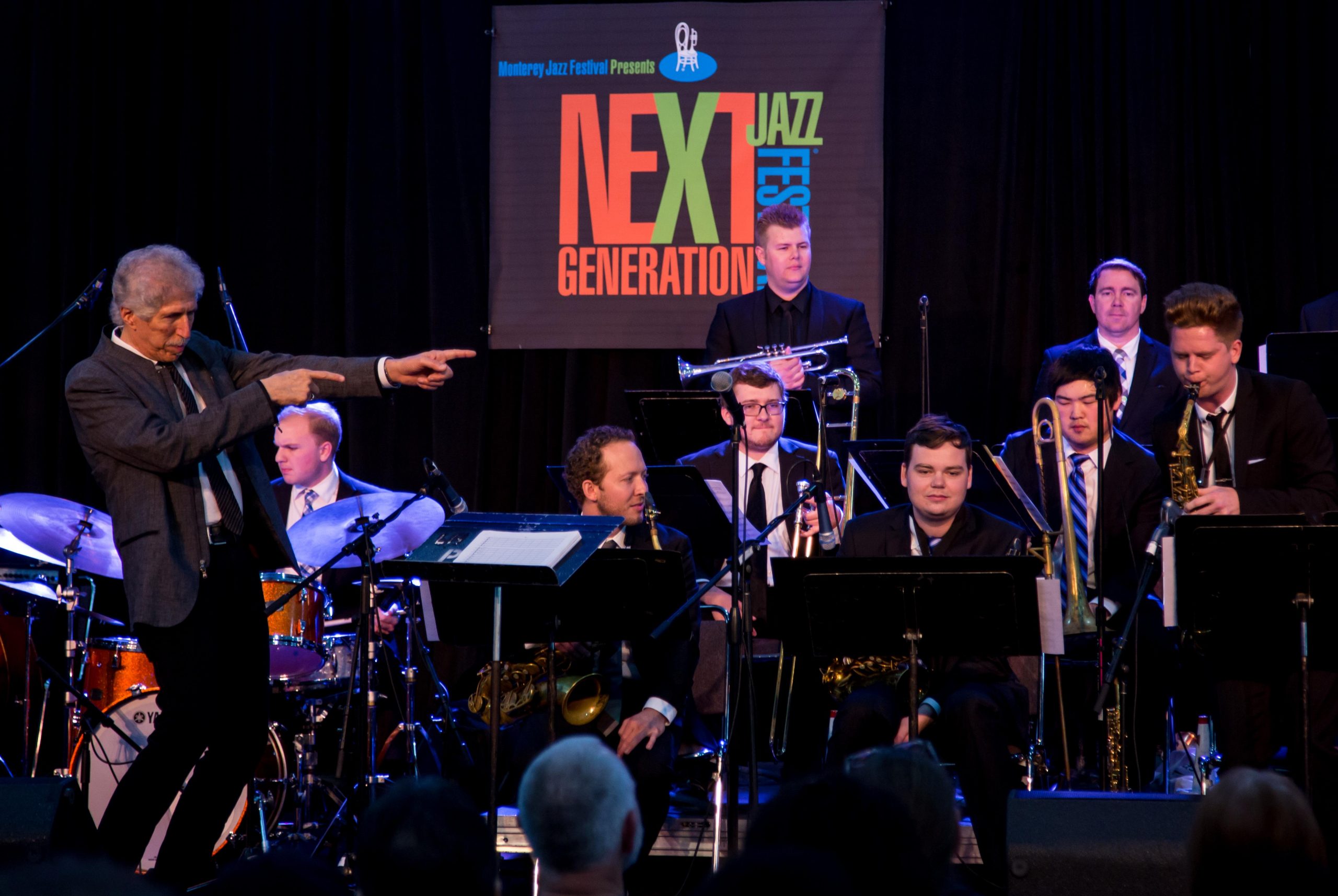 ABOVE: The USC Thornton School of Music Big Band at the 2016 Next Generation Jazz Festival, directed by Bob Mintzer. ©Cole Thompson

As a nonprofit, Monterey Jazz Festival is devoted to education by presenting year-round local, regional, national, and international programs. One of its flagships is the Next Generation Jazz Festival (NGJF), one of the premier student jazz competitions in the world, which will celebrate its 47th presentation in downtown Monterey, from March 31-April 2, 2017. With more than 1300 participating students, the NGJF is the largest gathering of young jazz talent in Northern California, outside of the Monterey Jazz Festival itself.

In 2017, 68 groups from nine states are finalists in the adjudicated categories, with over 90 student bands and special guests playing at the Portola Hotel, the Golden State Theatre, and three other locations in downtown Monterey.

Founded in 1971 as the California High School Jazz Competition on the Monterey County Fairgrounds by MJF Founder Jimmy Lyons as a conduit to provide top young jazz players with an opportunity to perform at the world-renowned Monterey Jazz Festival, the NGJF has grown in size, scope and importance to develop young student talent.

At the onset, there was only one division (High School Big Band) but over the years, the number of categories has increased to the current 10 divisions—which include middle, high school, and conglomerate big bands, combos and vocal ensembles, with cash awards, scholarships, and more, given to deserving winning soloist winners, with additional clinics, special showcase performances, and an opening night judges concert from the adjudicators and competition judges­—themselves all world-renowned jazz educators and performers.

At the time of its inception in 1971, there were only regional student jazz competitions across the United States. The California High School Jazz Competition gave students a competition forum—and a prize—of playing at the Monterey Jazz Festival, which differed from all other student competitions, which were self-contained. No one had hosted top student bands to compete and earn a performance spot at a major jazz festival.

BELOW: 1971’s winning high school big band at the California High School Jazz Competition was from Ygnacio Valley High School from Concord, Calif., and featured Mary Fettig on alto saxophone. After two years at UCLA, Mary would join the Stan Kenton Orchestra as the first woman to play in the band.

In 2004, the event was renamed the Next Generation Jazz Festival and moved from the relatively isolated Fairgrounds to the more public downtown Monterey, where it has a deep impact on the local area. Some of the student performers who have appeared in the past at the NGJF and have gone on to professional careers in music (and have appeared at the Monterey Jazz Festival as well) include Joshua Redman, Patrice Rushen, Benny Green, Ambrose Akinmusire, Johnathan Finlayson, Donny McCaslin, Elena Pinderhughes, and the 2017 Monterey Jazz Festival Artist-in-Residence, Gerald Clayton. “Maybe the most exciting class school trip we had all year was the Monterey competition,” recalled Clayton in an interview with Monterey Jazz Festival. “I think there’s something really nice when you travel somewhere and then encounter other peers that are on the same journey and the same path, and share similar passions.”

The explosion of applause and excitement from parents and fans in the audience when the top groups are announced is something to behold, and is a highlight of the year for many people to watch. Thousands of bands and students have come to compete at the NGJF, and over the years, it has reflected the robust nature of top school music programs—with winning high school bands from Northgate, Berkeley, Folsom, Rio Americano, and the Los Angeles County High School for the Arts, and many others, as well as ensembles from Cal State Long Beach, Northridge and Sacramento; USC, UNLV, and University of Miami, some of the top schools in the country. The Frost School of Music Big Band from the University of Miami directed by John Daversa, won the College Big Band Division in 2016 for a second time, and later that year, Daversa (himself a two-time Next Generation Jazz Orchestra member) would become a triple Grammy-nominee with his own Big Band.

But sometimes the incredible and inexplicable happens: Someone comes out of nowhere to win their division. In 2016, saxophonist Kenton Dick and drummer Ethan Olynyk from Wellington High School in Nanaimo, British Columbia, Canada, won the NGJF’s combo category as a duo, showing a deep maturity and knowledge of the art form as they out-performed other high-level student trios, quartets and quintets to win a spot at the Monterey Jazz Festival. They were the first international winners in NGJF history. Kenton was later named as the 20th Jimmy Lyons Scholar to Berklee College of Music, a four-year, full tuition award.

In 2011, a 17-year old pianist named Chase Morrin came to the NJGF from San Diego­—with a band of friends that rehearsed in their spare time—and won that year’s open combo category, competing against older university students. Chase additionally won the 2011 composition Competition award and gained admission to the Next Generation Jazz Orchestra, a triple-achievement that had never happened before—or since. Morrin recently graduated from Harvard University with a B.A. in Computer Science, while he simultaneously got his M.M. in Jazz Composition from the New England Conservatory of Music. Chase is currently working on a second M.M. at Berklee College of Music’s Global Jazz Institute.

The Grammy-winning NGJF and Next Generation Jazz Orchestra alumni Joshua Redman once called the student competition the “Super Bowl” of California High School Competitions. “Ever since I really started to be conscious of jazz…the Monterey Jazz Festival has always been a mythic place.”

BELOW: The Beaverton Arts & Magnet Academy wins in 2005. ©Cole Thompson​