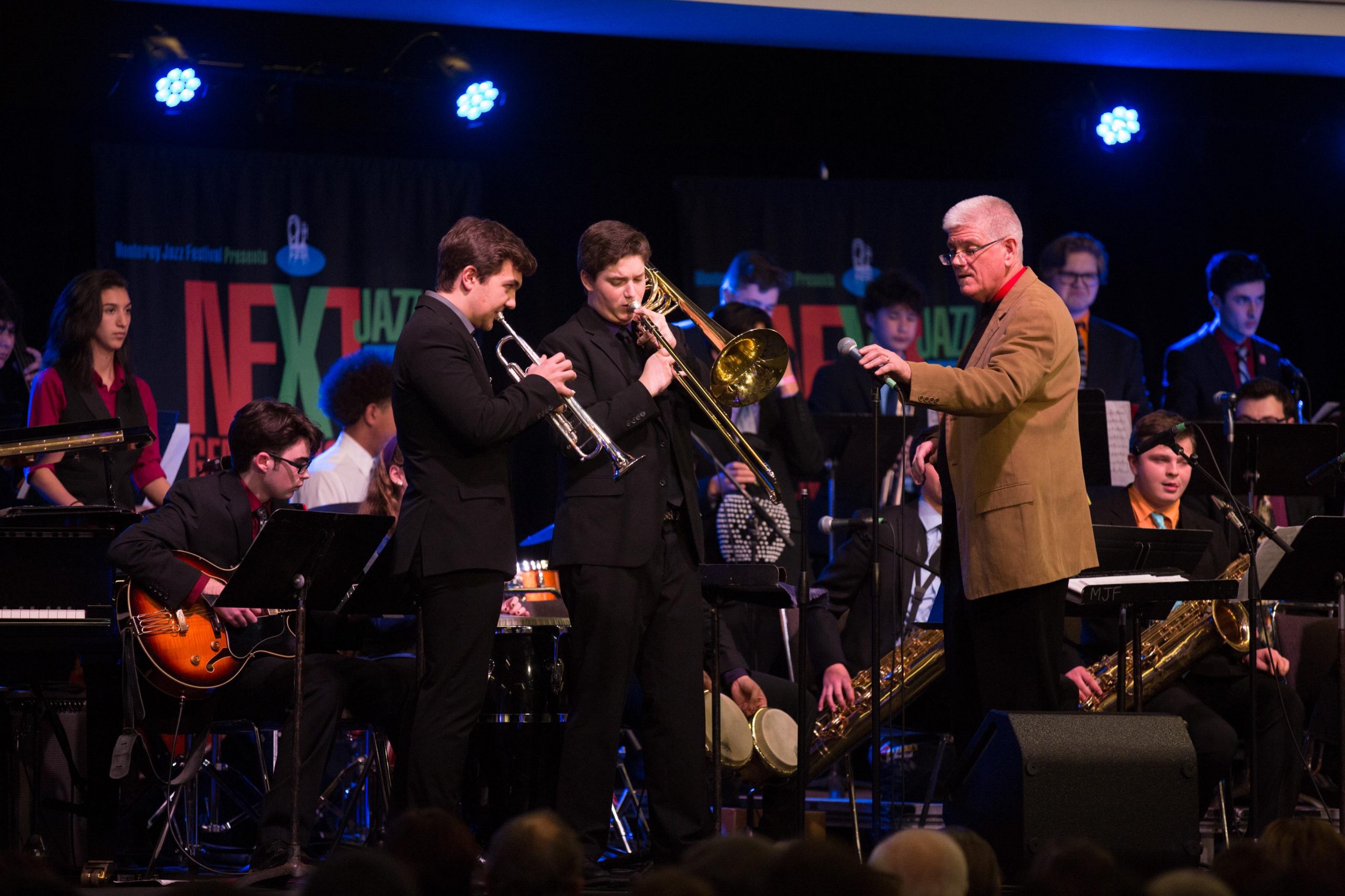 Each year, we are always humbled by the reactions of the students who come to the Next Generation Jazz Festival. They work all year to qualify to come to the festival, which is not a small accomplishment. Then comes the acceptance to the festival, and all the prep and practice that comes with it, and then the actual trip to Monterey. If you’ve ever gone on a family trip (to a place like say Disney World) or you qualified for a NCAA sporting event, you might remember the excitement and sheer anticipation of the trip. This is what we see when the hundreds of students arrive and perform for the audience, a very intense and joyful explosion of energy. And of course, when the soloist winners and top placing bands are announced, there is nothing like it! The awards are merely an expression of all the hard work they’ve done, but every year, we are truly humbled by the impact the event has on the musicians involved — Nearly 1,300 students in 100 groups, performing almost 160 shows.

In the High School Big Band Division in the Northgate High School has five-peated in in their division – the first time in NGJF history that any band has won any division five times in a row. There have been a few four-peats, but Northgate is a first!

Downey High School Jazz Band I will be making their MJF debut and the El Cerrito High School Jazz Ensemble will be the first band from that school to appear at MJF since 1991. (Their director, Keith Johnson, directed the JazzSchool during their wins in the Conglomerate Big Band Division from 2009-2011).

In the High School Combo Division, the Booker T. Washington High School for the Performing and Visual Arts Jazz Combo I will make their first appearance at MJF since 2003.

High School Vocal Division, Valencia High School Two ‘N’ Four made their first win. It will be their fifth consecutive appearance at MJF.

Above: The moment when a fan congratulated Valencia High School Two N’ Four on their win.

The Santa Clarita Valley Signal interviewed director Christine Tavares-Mocha after the event: “Some of my students have been trying for four years and this has never happened. Some of them were stunned. Others actually cried because people came up to them and said, ‘Out of 30 years you moved me’ and they started crying,” Tavares-Mocha said. “I remember right after we were done one of them said this is what it’s all about, this is why [we] perform. We don’t perform for the trophy, we perform to inspire others and to inspire ourselves to strive and work harder.”

Folsom High School Jazz Choir I has made 27 consecutive appearances at the NGJF and 2018 will make their 20th appearance at MJF since 1991.

In the High School Conglomerate Big Band Division, SFJAZZ High School All-Stars Big Band made their 5th win in the division since 2013.

In the High School Conglomerate Combo Division, the Colburn Jazz Workshop Thursday Night Band won for their first time in their school’s history.

In the College Big Band Division, for the second time in two years, there was a tie for first place – between the University of Central Oklahoma Jazz Ensemble I and the University of Denver Lamont Jazz Orchestra. Both make their MJF debuts. There also have never been any repeat groups who have won two years in a row in this division.

In the College Combo Division, first place went to the University of Nevada, Las Vegas Honors Trio, which featured Patrick Hogan, a Monterey Bay area native. No group has won twice in a row in this division.

In addition to the thousands of students, fans, parents and staff who cam for the weekend of March 9-11, we did have a very special guest, as an adudicator Tanya Darby. Tanya had been in MJF’s educational programs in the late 1980s and was a Next Generation Jazz Orchestra member from 1992-1994. Welcome back!