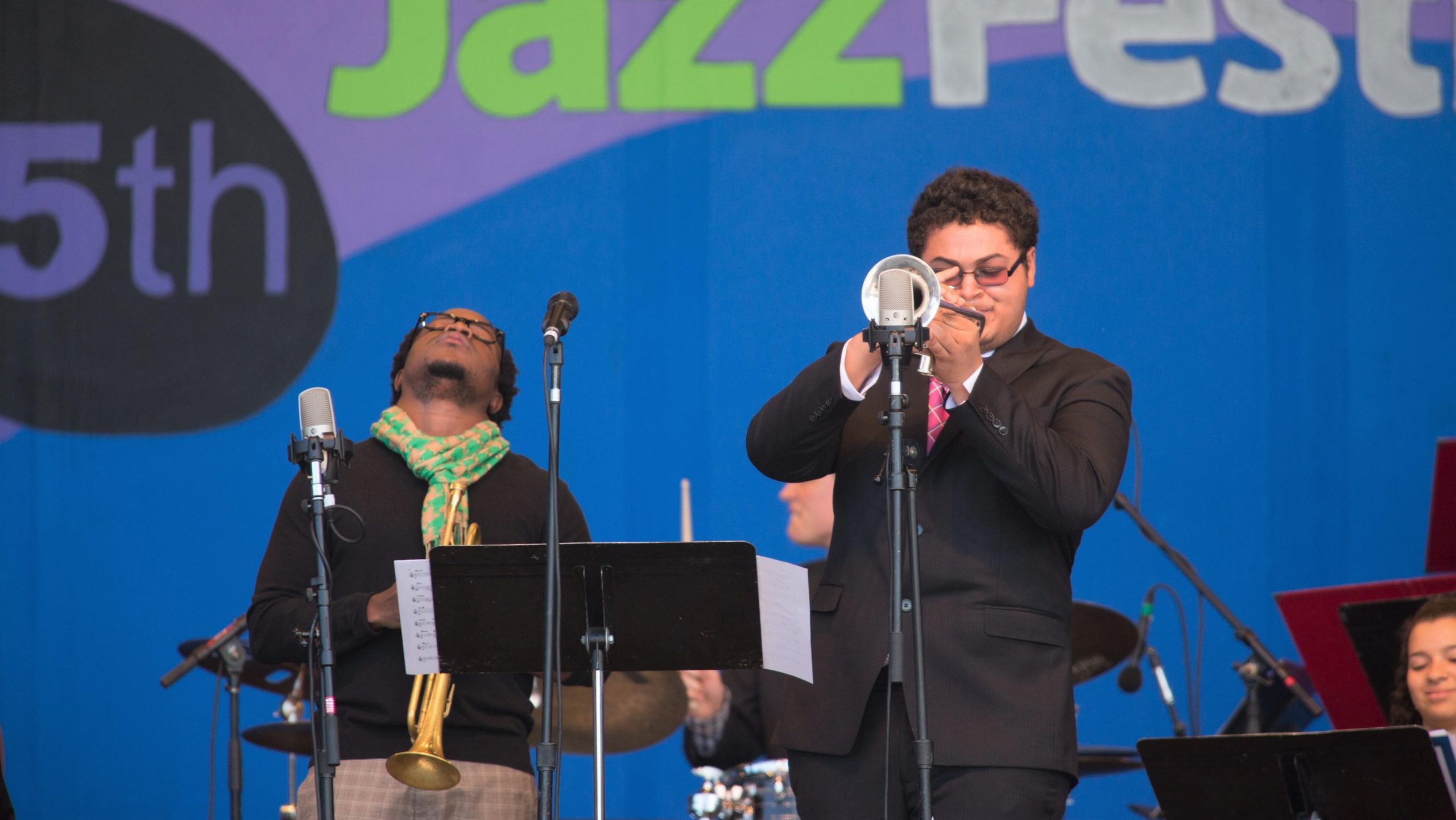 ABOVE: Ambrose Akinmusire and Adam O’Farrill at MJF55 in 2012. ©Tomas Ovalle

As always, the musicians who have participated in our jazz education programs are pushing the envelope. Recently, we got word that two members of the Next Generation Jazz Orchestra, trumpeter and composer Adam O’Farrill and drummer Jimmy Macbride were in the news.

Jimmy Macbride is a 2008 and 2009 NGJO member, was featured in the June 2018 issue of Modern Drummer. Currently based out of New York City, he has performed with a wide variety of artists including Herbie Hancock, Terence Blanchard, Wynton Marsalis, Kenny Barron, Jimmy Greene, and Adam Rogers. Coming from an artistic family (his father is a composer and mother is a visual artist), Jimmy began playing drums at age three and gravitated toward jazz music at an equally young age.

““To me, Jimmy Macbride holds a special position in the pantheon of fabulous drummers from MJF’s Next Generation Jazz Orchestra, and is now one of the most widely respected players on the scene,” says Paul Contos, MJF’s Education Director. “I continually observe his name on the personnel of jazz recordings reviewed, and anyone is fortunate to have Jimmy on their session or on the bandstand. When Jimmy was in the NGJO I never had an ounce of worry about how the drums were being handled, as he has always sounded and swung like a consummate pro.”

Jimmy is a recent graduate of The Juilliard School, where he studied privately with Carl Allen, Billy Drummond and Kenny Washington. He is a regular performer throughout New York City, performing at such venues as Dizzy’s Club Coca-Cola, Smalls, The Jazz Gallery, and The Blue Note. His musical talents have also taken him worldwide, touring across Europe, Asia, and North America. Jimmy has also appeared at some of the world’s most famous venues, including the Monterey Jazz Festival, North Sea Jazz Festival, and Newport Jazz Festival, among others. He performs regularly with different groups including Nir Felder, Samora Pinderhughes’ Transformations Suite, Lucas Pino’s Nonet, Nick Finzer’s Hear & Now, and the Roxy Coss Quintet. In addition, he can be seen playing with many of New York’s most creative and forward-thinking artists, including Lage Lund, Melissa Aldana, Ben Street, Kevin Hays, Fabian Almazan, Matt Brewer, Michael Rodriguez, and Dayna Stephens, among many others. He is also an active recording artist, appearing on over 20 albums to date.

Trumpeter and composer Adam O’Farrill, a 2011 and 2012 NGJO member, recently released his second album El Maquech with his group Stranger Days. The album was reviewed by Kevin Whitehead on NPR’s Fresh Air.

Born and raised in Brooklyn, New York, Adam O’Farrill was born to a deep musical legacy. His grandfather was the legendary Afro-Cuban composer/arranger, Chico O’Farrill. Adam’s father is the GRAMMY award-winning pianist/composer/activist Arturo O’Farrill, and his mother is pianist and educator Alison Deane. O’Farrill has been surrounded by music since he was very young. He began studying piano at age six, and trumpet at age eight, while starting to compose around the same time. Since then, O’Farrill has made numerous artistic accomplishments. He recently received the 2016-2017 The Jazz Gallery Residency Commission, for which he premiered a new work, “I’d Like My Life Back” for voice and septet, in April 2017. He was commissioned by YoungArts to collaborate with actress Devyn Tyler, and filmmakers Dan Frantz and Andy Koeger on a short film called Gold, which Adam scored. The Baltimore-based chamber duo, The Witches, commissioned O’Farrill to write a piece for their project, Behind the Curtain, celebrating feminity and female leaders of the world today. He wrote “Overcoming” dedicated to Lizzie Velasquez, the motivational speaker who was born with a disease that prevents her from accumulating body fat. Recently, O’Farrill completed his Bachelor’s Degree at the Manhattan School of Music, where he studied with Laurie Frink, Cecil Bridgewater, Reiko Fueting, Thomas Smith, Greg Gisbert, and Tony Kadleck.

ABOVE: Rudresh Mahanthappa with Adam O’Farrill at MJF59 in 2015. ©Jim Stone

“The first year Adam O’Farrill was in the band, he was featured throughout, as he sounded so much like Freddie Hubbard,” recalls Contos. “The following year he blew us all away with his trumpet prowess – not just those of us in the band, but audiences all over Japan as well as at the MJF, especially in a duo with Ambrose Akinmusire in Monterey. Adam’s star will continually rise, and we will always hear the most genuine and purest form of creativity from him.”

In 2015, O’Farrill was featured on two of the year’s most acclaimed albums. He was featured on Rudresh Mahthappa’s Bird Calls, which won the DownBeat Critics Poll for Best Jazz Album, and was named one of the Best Jazz Albums of 2015 by NPR, New York Times, Chicago Tribune, and others. Later that year, O’Farrill was featured (along with Mahanthappa, and Zack O’Farrill) on Arturo O’Farrill’s Cuba: The Conversation Continues, and was nominated for the GRAMMY Award for Best Large Jazz Ensemble Album, and won the Latin GRAMMY Award for Best Latin Jazz Album.

Congratulations to these talented young musicians! We are exited to hear of their