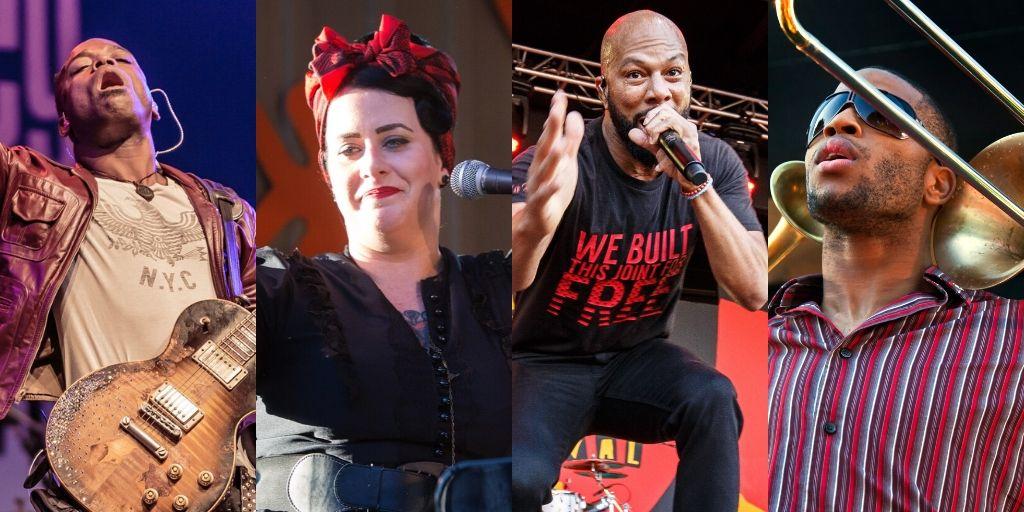 Now that the decade has moved on into the “roaring twenties,” there have a been a lot of “best of the 2010s” lists coming out. Looking back at MJF over the decade, we experienced a real change as the audiences and artists began to shift. Here are some of the key moments that show the evolution of jazz, the festival and the attitudes that surround the genre in its ever-changing moods. Louis Armstrong once said “If you have to ask what jazz is, you’ll never know.” So with that in mind, here are some of our personal choices that stuck out for different reasons, but that each epitomize the MJF experience.

This exciting artist really made a powerful statement at MJF53. We didn’t quite expect that Trombone Shorty would be so explosive, and the crowds that saw him agreed. His second show on the Garden Stage was so packed that it seemed like an endless blanket of audience – and he sold so many CDs of his recent release Bacatown, that it re-entered the Billboard charts. They had to go back to the hotel to get more of them! Other highlights included the ageless Roy Haynes as the showcase artist, Harry Connick Jr., and Ahmad Jamal.

We didn’t know that it would be Sonny Rollins’ last appearance at the Festival, and that enough would be an event, but Vince Mendoza’s “Still Ahead” Orchestra really hit it out of the ballpark at MJF54. Getting the original Davis-Evans scores that were used on the original recordings was difficult enough, but performing them was another story. The show took place right as the sun was setting on a beautiful Monterey evening and the result was a real sonic tour-de-force. The show still can be heard at NPR in all its glory.

Tony Bennett was the headliner on Saturday night at MJF55, and his show was sublime. Esperanza Spalding made her second appearance after her upset win over Justin Beiber for the Best New Artist Grammy, and Jack DeJohnette burned up the stages as Showcase Artist. But it was the debut of Gregory Porter, in the Night Club on the far end of the Fairgrounds on Friday night, that resembled a church revival; it seemed as if the room was too small to contain him. His show got the patrons talking for the rest of the weekend and it signaled the dawn of fantastic new artist. He would return as an Arena Stage artist the next year.

2013: Davina and the Vagabonds come out of nowhere

MJF56 was a joy for everyone. Joe Lovano & the Dave Douglas Quintet premiered two new works by Wayne Shorter that ended up on a Blue Note album, Snarky Puppy made their MJF debut, but it was the charming throwback artist Davina & The Vagabonds who made everybody smile in the waning hours of Sunday afternoon – she brought a vibrant feeling of the past, present and future with her band. Everybody adored her. She came into the festival a complete unknown, and walked out a star. She played the Arena Stage the next year.

2014: The Roots make a pivotal performance

How do you choose between Charles Lloyd, the debut of Cécile McLorin Salvant, Herbie Hancock, Gary Clark Jr., or Billy Childs at MJF57? The middle of the decade was approaching, and a paradigm shift was happening with the booking of The Roots, a band known for taking risks as they straddled the line between hip-hop, rock, jazz, and fusion. There were plenty of people that listened to a few minutes of their explosive one-hour continuous set of music on Saturday night in the Arena, only to leave for purer jazz pastures. But the band played on, in what marked a turning point for the decade’s musical direction. MJF also upgraded the Arena screens from a single small rear-projection to large dual LED ones (the first upgrade since 1997) and we started putting grass sod into the Arena floor. A big improvement for the Arena experience!

MJF58 was a hard call. Geri Allen’s Erroll Garner Project was a thing of beauty, Jaco’s World was an overwhelming show; Pete Escovedo, Dianne Reeves and Ambrose Akinmusire, Snarky Puppy and Chris Botti all played with class and fire. But it was Chick Corea & Béla Fleck’s duo set that kicked off Sunday night – part bluegrass, part classical and part free jazz – that really sparked the imagination. It was two masters showing that magic is real and having a lot of fun in the process.

When Quincy Jones signed on to be at MJF59, it was an event. Not only was Q there all weekend, he outlasted nearly everybody in “The Hang.” It was a true celebrity extravaganza. The presentation of the “A&M Years” had so many moving parts that it’s our top pick of 2016. But the Bad Plus Joshua Redman, Kamasi Washington, Joey Alexander, the very futuristic Jacob Collier, and many others were all in contention for best show of the year. It was quite a festival.

MJF60 was a powerhouse of talent. Every day was so filled with highlights, from across many genres of jazz and beyond: Tributes to Dizzy Gillespie and Sonny Rollins (Jimmy Heath’s solos on “Round Midnight” were worth the price of admission alone); Mr Sipp’s stroll through the Arena floor; Dee Dee Bridgewater singing “Purple Rain”; Leslie Odom Jr.; Monsieur Periné; Chris Thiele & Brad Mehldau, Angélique Kidjo; Chick Corea & Herbie Hancock; Clayton-Hamilton Jazz Orchestra premiering “Stories of a Groove”; the list goes on. But it was Common who reinforced that jazz and hip-hop are closely related. Those who had walked out on The Roots three years earlier stayed for Common’s whole show, and it signaled that the era of head-solo-head on jazz standards had younger brothers to keep it company in a broader cultural shift.

MJF61 was the year of the woman. With a strong showing of women instrumentalists like Ingrid Jensen and Tia Fuller as Artists-in-Residence, there was also a conscious move to bring younger audiences to jazz, and a younger generation of jazz artists to audiences. The Monterey Jazz Festival 60th Anniversary Celebration featured top millennials Cécile McLorin Salvant, Bria Skonberg, Melissa Aldana, Christian Sands, Yasushi Nakamura, and Jamison Ross, and they would subsequently tour the country the next year, delivering outstanding music night after night. Other standout performances included Dianne Reeves, Charles Lloyd & The Marvels with Lucinda Williams, Norah Jones, Anat Cohen, Jon Batiste & the Dap Kings; tributes to Ray Brown and Michael Brecker; Jane Ira Bloom, Oscar Hernández, and many others.

Sunday night shows on the Garden Stage can be a lonely endeavor. People are leaving for home, it’s late, and it’s been an exhausting weekend. Sunday night’s spot at MJF62 was Ambrose Akinmusire, presenting his latest recording, the visionary Origami Harvest. There were probably less than 100 people watching, but what was unfolding onstage was a miraculous synthesis of spoken word, hip-hop, free jazz, classical, and ambient music. The few that were there looked at each other and nodded knowingly that perhaps this was the most esoteric music of the festival. It was the quintessential “you had to be there” moment. Other more popular hits of the festival were the incendiary Cha Wa and Larkin Poe, Christone “Kingfish” Ingram’s incredible debut on the Garden Stage, Allison Miller & Derrick Hodge’s Tribute to Mary Lou Williams; Christian McBride Big Band, the joyful Tank & The Bangas, and many other jazz favorites, like Diana Krall, Kenny Barron & Dave Holland and the mesmerizing Jazzmeia Horn.

What will MJF63 bring to the stages of Monterey? Stay tuned to find out! Let us know your favorite MJF moments of the decade in the comments.