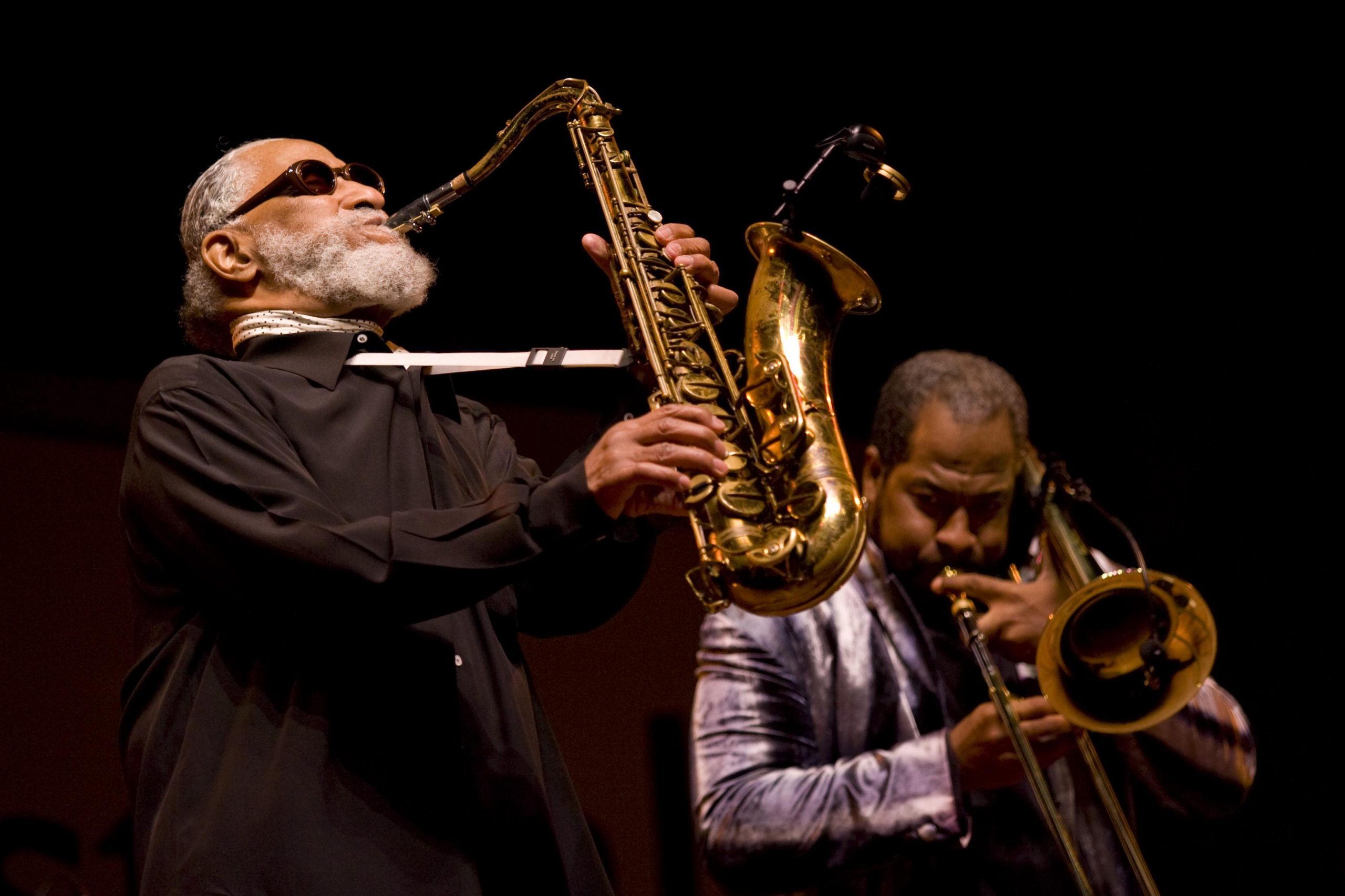 Above: Sonny Rollins and Clifton Anderson at the 50th Monterey Jazz Festival in 2007.

In celebration of MJF’s 60th Anniversary, we are proud to present an exclusive concert in tribute to the Colossus, tenor saxophonist Sonny Rollins.

Now retired, Sonny is one of the last surviving “alumni” of the 1958 Festival, and has performed at MJF seven times.

Below is an excerpt from a story that will be published in the Monterey Jazz Festival’s annual souvenier program, which will be available for purchase at the festival.

Living and Breathing in Time: The Colossal Influence of Sonny Rollins
By Jesse Hamlin

Sonny Rollins, probably the greatest jazz improviser since Louis Armstrong, is always buoyed by the energy of the audience when he plays, or as the saxophonist describes the thought-free state he aspires to, “the music is playing me.”

But there’s something particularly stimulating about the hum of the Monterey Jazz Festival, says Rollins, who performed at the first festival in 1958 and many other times here over the ensuing decades. Of all the giants who played that inaugural year—Armstrong, Billie Holiday, Dizzy Gillespie and Dave Brubeck among them—he’s the last still with us on this earthly plane.

“The energy at Monterey is great, man! I remember so many instances there when it was like being carried on an ocean, lifted up,” says the exuberant 86-year-old master, on the phone from his home in Woodstock, N.Y. “When I play there I tend to get engulfed in something.”

Engulfed is a good word for the feeling of being swept up in Rollins’ music, in those endlessly inventive, propulsive solos that dance, dart and flow in unexpected ways. His soulfully singing phrases can be sardonic or explosive or rhapsodically romantic. A huge influence on the language of jazz—and improvisers—on many instruments, Rollins is a revered artist whose expression speaks directly to people of varying musical experiences and tastes. Famously self-critical and focused, he has created a bountifully rich body of recorded work spanning six decades, and has had an indelible effect on those of us lucky enough to have heard him live over the years.

“Even though I’m not blowing my horn, my music is going around in my head 24/7—patterns, ideas, songs,” says Rollins, who has a pulmonary condition that has kept him from performing the last few years. He doesn’t travel much anymore and won’t be at the 60th annual Monterey Jazz Festival for the Saturday night Sonny Rollins tribute featuring four of jazz’s finest tenor saxophonists: Jimmy Heath, still vital at 90, Joe Lovano, Branford Marsalis and Joshua Redman.

Pianist Gerald Clayton serves as musical director for this MJF legend celebration, with bassist Scott Colley and drummer Lewis Nash joining the saxophone quartet. Drawing from the deep well of Rollins’ music, they’ll summon up the man who created it and say thanks, each his own way.

“I’m so happy to be honored in this way. I’m humbled,” Rollins says. “Those guys are great musicians, world-class people. It sounds like false modesty, but I’m very appreciative, and very grateful and very humbled by it. I mean it, that’s the truth, man.”

Like music lovers around the world, the artists playing for Sonny have their favorite Rollins albums, tracks or moments—landmarks like Saxophone Colossus and A Night at the Village Vanguard, The Bridge, Our Man in Jazz, Way Out West, East Broadway Run Down; sessions with Miles Davis, Monk, Clifford Brown, Coleman Hawkins or Don Cherry; a European bootleg of the piano-less trio with Roy McCurdy and Henry Grimes; a 50-minute version of “Four” that never flags.

You’ll hear music from some of those and other sources when the ensemble performs Rollins classics like “Tenor Madness”—how could you not with this lineup? —and each saxophonist is featured playing a piece of his choosing.

Jesse Hamlin has written for the San Francisco Chronicle and other publications over the past 30 years on a wide range of music and art, covering jazz musicians and symphonic conductors, sculptors, poets, and architects. He has also written for the New York Times, Art & Auction and Columbia magazines, as well as liner notes for CDs by Stan Getz and Cal Tjader.