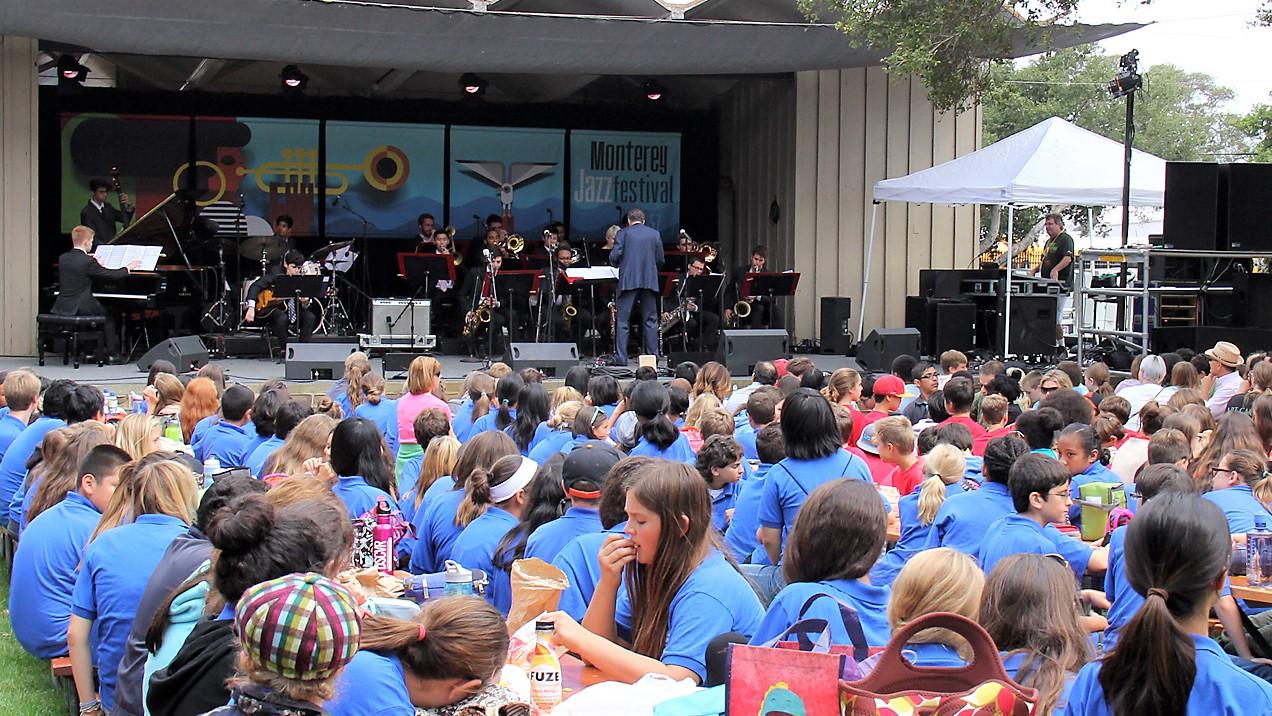 ABOVE: The Next Generation Jazz Orchestra performing at the Concert on the Lawn in 2014. ©Edie Ellis

You know that the Monterey Jazz Festival is close when the Concert on the Lawn takes place on the Thursday before the gates open. Inaugurated in 1990 and called the “Brown Bag Lunch Concert,” it’s now called the “Concert on the Lawn.” Created for Monterey County students as an outreach effort by Monterey Jazz Festival to to inspire the discovery and celebration of jazz, it has become a staple event over the last 29 years.

Performing in 2019 is the Next Generation Jazz Orchestra, some of the most talented student musicians in the country. In addition to performing the Concert on the Lawn, the NGJO will appear at a Rotary Club of Monterey event and an evening performance at MJF’s Jazz Legends Gala at the Tehama Golf Club in Carmel, honoring Kenny Barron and Dave Holland on September 26. The NGJO also performs with MJF62 Artists-in-Residence Allison Miler and Derrick Hodge on the Arena’s Jimmy Lyons Stage on Sunday, September 29, and throughout the Grounds during the three-day Festival.

The Concert on the Lawn begins at 11am on Thursday September 26 at the Garden Stage on the Monterey County Fairgrounds and is free for everyone. We hope to see you there!

Trumpeter Bryce Hayashi, 16, is a student at Northgate High School in Walnut Creek, California. He is a member of the award-winning Northgate Jazz Band and the highly-acclaimed SFJAZZ High School All-Stars Big Band. In 2018, Bryce played lead trumpet with the California All-State High School Honor Jazz Band, and in 2017 he held the lead trumpet chair in the California All-State Middle School Honor Jazz Band. His winning piece, “The Place I Call Home” will be performed by the 2019 Next Generation Jazz Orchestra on the Jimmy Lyons Stage on Sunday, September 29.

The 2019 Jimmy Lyons Scholar, Nick Isherwood, is a jazz bassist from Medical Lake, Washington, a small town just outside of Spokane. His private teachers include Kim Plewniak and Scott Steed. Isherwood was selected as the top bassist out of six competing states to perform with the National Association for Music Education All Northwest Jazz Band in 2016. After high school, Isherwood received a scholarship to attend the University of Northern Colorado as a jazz studies major, where he studied with Erik Applegate and Nicholas Recuber. Nick begins his studies at Berklee in September 2019 and will attend the 62nd Monterey Jazz Festival for the Jimmy Lyons Scholarship presentation on Sunday September 29 at 1:30pm on the Jimmy Lyons Stage in the Arena, and to sit in with the Berklee Global Jazz Ambassadors, led this year by saxophonist Prof. George Garzone. Read more here.